Continuing TIA’s series of guest contributors, this week the ghost of French explorer Rene Caillie writes in the third person about his visit to and return from Timbuktu.  He includes drawings from his stay there.

If the British Major Gordon Laing was the first European to reach the fabled city of Timbuktu, the real trick was not only to reach it, but to return and tell the tale.  This feat was accomplished in a most improbable way by a young Frenchman, René Caillié. 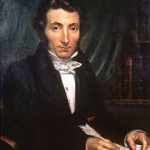 A portrait of Caillie

Caillié grew up in impoverished circumstances, reading tales of real and imaginary adventurers.  He wrote: “The History of Robinson Crusoe, in particular, inflamed my young imagination: I was impatient to encounter adventure like him.”  He yearned to achieve fame and fortune just as do teenagers of today dreaming of becoming rock stars or basketball phenoms.  In Caillié’s day, exploration was the route to rock stardom of the time.

Both parents died by the time he was 12.  At 16 he signed on as a crew member of a ship sailing to French West Africa, then crossed the Atlantic to the Caribbean island of Guadeloupe.  Still later he returned to Saint-Louis in French West Africa, full of ambition to become an explorer.  The destination of choice was Timbuktu, thought by Europeans to be the source of their gold prior to the discovery of the mineral wealth of the New World.

But Caillié had no contacts, virtually no money and, unlike Laing, did not have an organization to finance and prepare the customary expedition supported by soldiers and African porters.  What he did have was courage and ambition, determination and imagination.  And he had a goal: to capture the prize of ten thousand francs offered by the Société de Géographie to the first person to visit and return from Timbuktu.

He decided that, since he could not gather an expedition, he would walk to Timbuktu.  That meant months of moving through unknown and hostile territory where a man of Christian background would not be welcome.  So he would do the journey in disguise.

Caillie’s drawing of himself in disguise

His imagination concocted this back story: that he was born an Arab in Egypt, carried off as a child by the French and brought to west Africa; now, having escaped from the French, he wanted to return to his own country.  To give that story credibility he spent eight months with the Brakna Moors north of the Senegal River, learning Arabic and the laws and customs of Islam.

He converted his savings into gold, silk handkerchiefs, knives, beads and tobacco.  Dressed as a Muslim, he joined a Mandingo caravan and started inland, moving along the Rio Nunez in present-day Guinea.

He left Conakry in mid-April, 1827.  Overcome by scurvy, he convalesced for five months in an African village, resuming his travels in January, 1828.  He reached Djenné in the Niger delta and spent two weeks there in March.  From there he found passage in the hold of a ship where he travelled with slaves and arrived in Timbuktu on April 20. 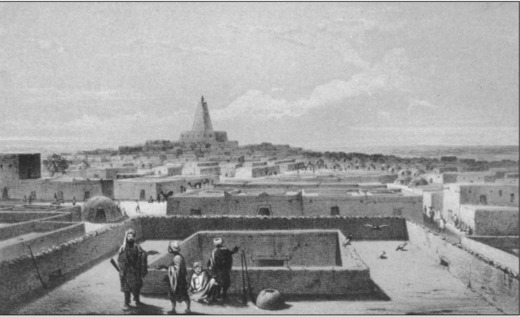 A Caillie drawing of Timbuktu during his visit

“I looked around and found that the sight before me did not answer my expectations,” he wrote.  “The city presented, at first view, nothing but a mass of ill-looking houses built of earth.”

Caillié stayed in Timbuktu for two weeks.  He gathered information, making notes and drawings surreptiously, then joined a caravan headed for Morocco.  He was particularly anxious not to return west, fearing accusations that he had never reached Timbuktu.

The journey across the desert took almost three months.  Spinning pillars of whirlwinded sand attacked the column of 1,400 camels.  Thirst and mirages tormented Caillié.  Suspecting he was a Christian, members of the caravan taunted and threw stones at him.

He survived the crossing only to find that a Frenchman disguised as a Muslim could expect little help even from his country’s diplomats.

The French consul in Rabat, a Jewish merchant, offered him no help.  He begged for food and slept in a cemetery.  The consul in Tangier repeatedly refused him entry, on one occasion shouting, “Turn out this dog of a beggar!”  Ultimately he relented, however, and arranged passage for Caillié to France.  There he was greeted as a hero.  He was awarded the ten thousand francs by the Geographical Society, received the order to the Legion of Honor and a pension.  He married, settled near his birthplace and died in 1838. 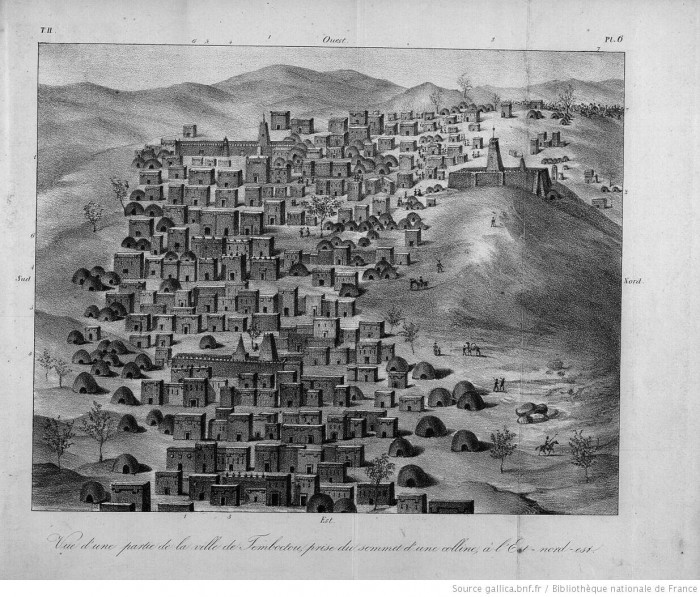 Caillie’s drawing about which he comments in the text

His account of his explorations – Journal d’un voyage à Temboctou et à Jenné dans l’Afrique Centrale – was published in three volumes.  In text accompanying a sketch he made of the town, he wrote:  “From the tower I had an extensive view over an immense plain of white sand, on which nothing grows except a few stunted shrubs, the mimosa ferruginea, and where the uniformity of the picture is only here and there broken by some scattered hills or banks of sand. I could not help contemplating with astonishment the extraordinary city before me, created solely by the wants of commerce, and destitute of every resource except what its accidental position as a place of exchange affords.”  That report punctured European illusions about Timbuktu.

His explorations demonstrated that a person able to carry off an improbable disguise and traveling as locals did could make discoveries beyond the capacity of larger expeditions.