The ghost of Major Gordon Laing tells about a visit to the fabled city of Timbuktu one hundred fifty years after his first visit.  The soul of modesty, he recounts his exploits in the third person.

So you want to go to Timbuktu.

So you want to discover its secrets.

So, 190 years ago, did hundreds of young romantics.  Scores of them set off: explorers, restless adventurers dressed in disguise, unknowns hungry for fame, officers eager for glory and wealth.  Eccentrics and fools went, too.  There was an unrequited lover, a wealthy Dutchwoman who assembled a party and marched into the sea of sand.

They started off pluckily.  They gathered information, recruited guides, many of them unreliable, some treacherous.  Then they slogged into the Sahara’s inferno.  They fought off thirst, trusted mirages, survived on unfamiliar food, trudged past the bones of failed caravans.  They tore open the veil of mystery with which the desert covers itself.  And with only two or three exceptions, they were never seen again.

You’ll be better off than they were.  You’ll survive.

But you will almost certainly not unlock the secrets of Timbuktu.  Within a matter of hours, however, you’ll discover facts which decades of valiant effort failed to unmask.

In a sense the main fact that eluded detection was this: man’s enormous capacity for self-deception, for disregarding information contrary to what he wishes to believe.

Before the New World’s discovery, Africa was Europe’s prime supplier of gold.  It came from somewhere in or beyond the Sahara.  Most knowledgeable Europeans thought its source was a place called Timbuktu.

This was a city of fabulous wealth, the seat of a university, a center of sophistication and Muslim culture, the hub of caravan traffic.  A rush developed to find and bring back news of it.

The most determined of its explorers was Maj. Gordon Laing, a Scot fired with ambition to be the first white man to enter Timbuktu.  Major Laing had led some inland explorations while serving in Sierra Leone and the idea of Timbuktu obsessed him.

He persistently sought permission for the journey.  He prepared himself for its rigors by sleeping on the floor and writing with his left hand.  As things turned out, the latter exercise was not a bad idea.

Major Laing arrived in Tripoli to undertake the Timbuktu mission in May, 1825; by early July he had asked the British consul’s daughter to marry him.  She accepted but her father denied him.  As a result Laing and the horrified consul broke off speaking relations; the suitor camped outside the city.  Ultimately the consul granted the couple permission to marry.  But since he doubted his authority to perform legal marriages, he insisted that the major pledge – in writing – that he would not consummate the marriage until he returned from Timbuktu.  The major agreed.  Two days after the ceremony he marched into the desert.

Circling around a local civil war, Laing got to Ghadmes.  He spent days negotiating the onward journey with guides who demanded more money.  He received inquisitive stares, doctored local inhabitants, was pestered for handouts, hungered for mail and burned with love for his bride.

He pushed on.  He reached an oasis called In Salah.  There he was such a curiosity that he had to nail up his door.  He also feared for his life.  Besides being a Christian among Muslims, he was thought to be the leader of an earlier expedition which had shot and wounded a local resident.

After weeks at In Salah the Laing party joined a larger caravan and re-entered the desert.  News of the major’s presumed wealth preceded the caravan, and it ventured nervously through country known for civil wars, feuds and marauders,  Ultimately Tuaregs followed the expedition for five days,  Before dawn on the sixth day they attacked the explorer’s party.  Laing survived multiple wounds, the loss of several subordinates, and the theft of virtually all his funds.

The caravan continued, leaving the wounded leader to follow as best he could.  Some 400 miles later he reached the village of Sidi el Muktar.  There the village chief befriended the explorer, fed and sheltered him.  He advised him not to enter Timbuktu due to local unrest.

Laing was determined to go on.  Before he could do so, a plague struck the village.  It killed the chief and all surviving members of the Timbuktu mission except Laing himself.

Finally the chief’s son agreed to take the scarred and impoverished explorer to his destination – in exchange for all his possessions.  The major entered the fabled city 13 months after he had left Tripoli.  He stayed five and a half weeks.  The only surviving account of his findings and impressions is a short letter – written with his left hand.  It tells almost nothing. 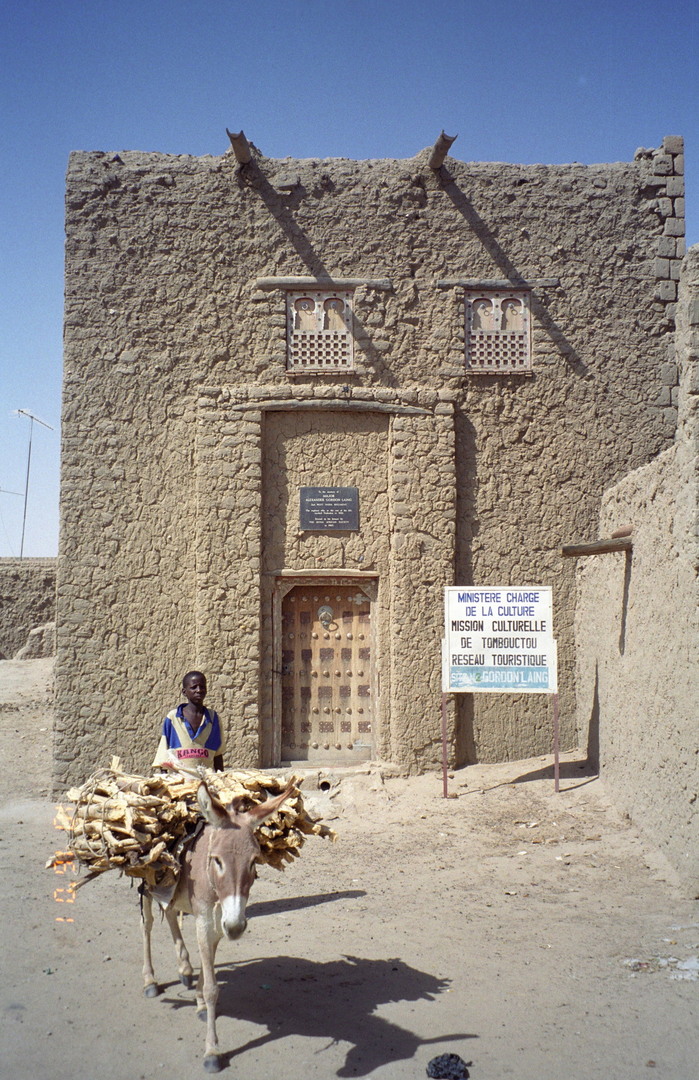 Purportedly the house where Laing stayed in Tumbuktu

Laing reached Timbuktu, achieving his goal of being the first European to enter the city and discover its secrets.  To his disappointment, he found a city in decline from its great heyday of several centuries before.  It was not a city of gold, not the fabled city Europeans had spun fables about for centuries.

Due to personal danger, Laing is thought to have sent his journal back to Tripoli by messenger.  Speculation exists that it fell into the hands of the French consul in Tripoli who destroyed or suppressed it for reasons of nationalistic pride.  The major himself joined a small caravan headed for Morocco.  Three nights out the caravan’s leader murdered him.

The ghost deemed THE GIRL quite a nifty tale and noted that young women of Liz Jenkins’ era certainly lived differently from those of the Major’s time.  He alluded to the dilemma of being forced to agree not to savor the joys of marriage before attacking the desert.  When TIA inquired if the Major and his bride had abided by this agreement, the Major’s ghost gave a sly smile, but offered no reply.