At a time when few Americans had any consciousness of Africa, Donanne Ralston, then a teenaged diplomat’s daughter, took a trip from Cape to Cairo just before leaving for college. Here’s her account: 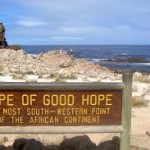 I was about to be eighteen.

Before I started college, our family of three would travel the length of the continent, from Cape to Cairo and into Europe beyond. We would go on the embassy’s military attaché plane as it flew to Europe for its periodic overhaul. The aircraft was a C-47 (or DC-3 in civilian lingo) that sat on runways with its nose in the air and its tail close to the ground. You entered near the back and walked uphill towards the cockpit. We three and the captain’s wife were to be the only civilians on board.

Naturally, we were looking forward to this month-long adventure. For a short while my dad would escape his official duties; in his absence the Vice Consul would mind the store. My mom would have a change of pace from constant hostessing and helping good causes in the community. And for a time I would leave the between-studies social whirl in which I found myself.   These sacrifices we were all willing to make!

The trip was to be a last vacation together before something momentous happened in my life. In a few short months I would leave for Principia College in the States.   And the trip was a reward of sorts for each of us for doing our jobs well, a time for the thee of us to be together before I left home.

“Beginning to get excited now! Taking too much fudge & English toffee & reading matter no doubt, but that’s part of the fun,” wrote my mom in her May 22nd letter to her folks in California.

We left from Johannesburg. Our itinerary was a sort of aerial hopscotch through the English-speaking countries on Africa’s eastern side. “The C-47 has six seats and a nice couch so we can take turns resting. It has an electric quart [pot] we can warm up soup in so we’ll have acceptable lunches and breakfasts.”

My memories of the trip remain fresh. In still colonial Nairobi acquaintances fetched us for dinner on the outskirts of town. As we stepped out of the car, we were greeted by the family pet, Peter the cheetah!

I recall the softness of an African night in Entebbe, Uganda. We stayed at a small hotel with open hallways on the shore of Lake Victoria.

My memory of Khartoum, Sudan? Sand! Sand everywhere! We stayed in the attractive apartment of an embassy family on leave. Sand came under the door; sand came under the windows. When we dined alfresco on a rooftop, sand came in the bowls set out for soup. In one graceful motion the waiters emptied them of sand, then ladled in the soup.

At Wadi Halfa on the Nile just south of the Sudan’s border with Egypt, several robed mechanics greeted the plane when we landed to refuel. They carried jerrycans and wheeled onto the tarmac a storage tank of petrol.   Forming a line, they filled a jerrycan from the tank, passed the can from hand to hand and eventually lifted it to one of their number standing on the wing. He poured the contents into the plane’s fuel tank.   They repeated this procedure until the tank was full.

For a week we flew the first half of each day, then landed and explored. In the north, over-flying deserts, we departed as early as 3:30 a.m. to avoid convection currents in the heat of the day. “… had a lovely smooth flight out of Khartoum after a day of bumps yesterday,” Tom wrote. A good thing we were well supplied with fudge and English toffee to encourage the crew for, “the pilots say it’s a real physical output to hold this dear old 145 mph plane on course when we have few checkpoints and can go no higher than 13,000 feet.”

From Cairo my mom wrote to her sister: “Got carried away at the Muski [bazaar] buying silky looking Egyptian cottons, so guess you’ll have some interesting skirt material for Christmas. The rooms here are lovely and air-conditioned. Can see the pyramids over the Nile as I sit here. Donanne got a cute camel in the bazaar about 20” high made of really soft, baby camel fur to take along to college.” [I had the camel doll for 35 years!] “She just got back from seeing the mummies at the museum.” 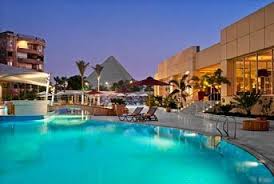 Pyramids now. Notice how Cairo has crept right up to the monuments.

At Wheelus AFB, Libya, I remember the roar of planes taking off in the night with their afterburners kicking in.   The weather was warm. In the officer’s mess we enjoyed a real American meal; the best thing of all was ice-cold apple juice!

We spent two weeks in Europe. In a Paris restaurant I made my folks proud; my French conversation lessons paid off enough for me to order a meal.   We actually got what we hoped I’d ordered. Then we and the plane headed south again. 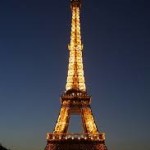 We three Ralstons had always traveled well together and this trip was no exception. When I was nine, half my lifetime ago, we’d struck out for two years in India. Now, nine years and several countries later, I was about to head for college in the States, about to start a whole new chapter.

In what must be a tribute to this dear pair, I left the nest without a backward glance. I knew they would always be there for me. They knew when and how to let me go. In a letter to my grandparents I confided, “Am very happy about Principia. Will be sorry to leave South Africa, but then I’m always that way.”

As it happened, my folks made only one visit to the college – in late autumn of my freshman year. My dad was then about to start his assignment with the inspection corps. But our travel tradition continued. One summer found us together in South America where my dad was inspecting embassies and consulates. And the summer of my graduation I spent with them in their home in Cambodia. But the trip from Cape to Cairo was one of our best adventures together.