For three and a half years the blog Travels in Africa has published weekly posts about people’s adventures in Africa. They amount to some 180 posts altogether. About 40 of these have been contributed by TIA readers; these have greatly enlarged the geographical range of the posts and enhanced the blog’s interest. TIA sends thanks to all contributors!

With this post – thanks to the cyber wizardry of Matt Myers, techie supremo – Travels in Africa has a new look. (With a few glitches to be corrected.) We hope you enjoy it.

This week’s post continues our series of “ghost contributors.” And we hope that contributors – some old friends, some new to the blog – will continue to feed us personal essays about African adventures of about 1000 words.

At the same time TIA is about to run out of original material. Because it has gathered new readers since being launched, we will recycle posts previously run, hoping new readers will enjoy them.

Continuing  TIA’s brief series of voices from the past, this week an intrepid woman gets her say.  Mary Kingsley is one of the most amazing women you’d ever want to meet.

While other well-brought-up English ladies took the grand tour, Mary Kingsley went to West Africa.  The time was the 1890’s.

Her friends were horrified.  Women did not have the vote then.  Genteel women did not work or pursue higher education.  And they did not tramp around alone in Africa. 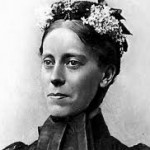 Anyway, everyone knew about West Africa: a terrible place, a hot, humid stretch of insect-infested coast, the habitat of savage beasts and savage men, of cannibals, dissolute traders, and myriad dangers.  It was certainly no place for dear, drab, long-faced Mary, spinsterish and over thirty.  She had spent her entire adult life at home, never leaving England except for a week in Paris and a holiday in the Canaries.

But Mary was no ordinary girl.  She had quick wits and tenacity, an inquiring mind, a cool head, and a sparkle in her eye.  She went armed with letters of introduction, a commission from the British Museum to collect West African fishes – and the traditions of her family.

She came from people accustomed to adventure.  A novelist uncle had wandered the Australian outback and reported the Franco-Prussian War.  Her doctor father established a family, then left it for a three-year voyage to the South Seas.  Other trips to the United States, Japan, Newfoundland and southern Africa followed.  Mary helped him research his investigations of tropical religions and acquired an interest in the subject.

Mary wrote no account of her first trip to Africa in 1893.  She landed at Luanda in Angola, bought some goods to trade, and plunged into the bush.

She did not travel like the famous explorers; she employed no army of porters.  She had a waterproof sack containing bed linen and clothes, notebooks and jars for specimen fishes.  She wore everyday clothes – blouse, long woolen skirt and bonnet – slept where she could, drank tea and ate local food.  She wandered widely, living as a trader, collecting fishes and inquiring about local religion.

Her second trip to West Africa took most of 1895.  She wrote a long description of it called “Travels in West Africa.”

During this time she got her fill of excitement.  She fell into traps, rivers, and huts and into the company of perfidious persons.  Her adventures occurred with missionaries, traders, and cannibals, with mosquitoes and leeches, rats, crocodiles, and gorillas, in canoes, in swamps, and on mountaintops.  They took place mainly in the back country of what is now Gabon.  She was often soaked to the skin and all the time she was collecting fishes and data on “fetish” and making detailed notes.

While staying on the Ogowe River she decided to see the famous rapids.  Reluctantly her missionary host got her a canoe and crew.  They started upstream against a strong current, huddling the steep bank, Mary having to jump from the craft occasionally to ease passage around projecting corners.  She writes: “M’bo said, ‘Jump for bank, sar,’ and I ‘up and jumped’ followed by half the crew.”

At midafternoon they got directions from a village chief who recommended they spend the night at the fourth village upstream.  They thanked him and paddled on – and on and on.  “Village number four we anxiously looked for,” notes the traveler; “village number four we never saw…  On we paddled, looking for signs of village fires, and seeing them not.

“About 8:00 p.m. we came to a corner, a bad one; but we were unable to leap on to the bank and haul around…  We fought our way round that corner, yelling defiance at the water.

“About 9:30 we got into a savage rapid.  We fought it inch by inch.  The canoe jammed herself on some barely sunken rocks in it.  We shoved her off over them.  She tilted over and chucked us out.  The rocks round being just awash, we survived….

“After a good hour and more of these experiences” – by now whirlpools had spun them off into an unknown, swift-flowing channel – “we went hard on to a large black reef of rocks.  So firm was the canoe wedged that… we wisely decided to ‘lef ‘em’ and see what could be done towards getting food and a fire.”

At 11:10 they found a village, “just a collection of palm mat-built huts very low and squalid…  The villagers… were painted vermilion all over their nearly naked bodies and were dancing enthusiastically to the good old rump-a-tump-tump tune…  They said that as they had been dancing when we arrived they had failed to hear us.  M’bo secured a – well, I don’t exactly know what to call it – for my (lodging).”

Mary Kingsley & Co. on the screen

Still, after some dinner, she writes, “I walked off down to the shore…  The moon was rising…  The scene was divinely lovely: on every side out of the formless gloom rose the peaks of the Sierra del Cristal.”  The next day she saw the highest rapids.

Later, with a party of Fans, a cannibal tribe, she walked across the trackless country from the Ogowe to the Rembwe river.  They passed through hostile villages.  Approaching one, Mary was walking “and the next news was I was in a heap, on a lot of spikes, some fifteen feet or so below ground level, at the bottom of a bag-shaped game pit.

“At these times,” she writes, “you realize the blessing of a good thick skirt.”  Had she adopted masculine attire as advised, she goes on, she would have been “done for.  Whereas, save for a good many bruises, here I was with the fullness of my skirt tucked underneath me, sitting on nine ebony spikes some twelve inches long, in comparative comfort, howling lustily to be hauled out.”

Later, meeting with the chief of a village of treacherous repute, Mary instructed her interpreter: “’Tell the chief,’ I said, ‘that I hear this town of his is a thief town.’

“So Pagan did.  It was a sad blow to the chief.

“I said it was; but I would reserve my opinion… until I had experienced it myself.”

This approach proved successful.  None of the party was eaten, a fate many of them feared.

Mary cheerfully survived it all.  She returned to England something of a celebrity, delivered her fish to the British Museum, and made her contribution to the day’s ethnography.  Her books were immensely popular.

They also influenced attitudes.  Since their author regarded Africans neither as “childlike savages” nor members of an inferior race, her writings helped to undermine popular stereotypes.  They showed that African culture had a rational, worthy basis, and that African society deserved respect for what it was.