Donanne and Fred return to Africa to live.
The date was Sunday, July 20, 1969. Donanne had left Johannesburg nine years earlier to attend college. I had flown out of Nairobi five years later, unsure if I would ever return. In the intervening years we had met and married. At the time of our wedding I was an unemployed graduate student in African Studies. Now I was the Africa Correspondent of The Christian Science Monitor and we were returning. We were excited. Our plane began its descent into Dakar.
The pilot announced that descent and added: “We have great news! The Americans have just landed on the moon!” Spontaneous applause broke. As Americans we could not help feeling proud.
The moon shone above as we crossed the tarmac, a brilliant whiteness the shape of a melon slice. What were the men up there doing? How did they feel? 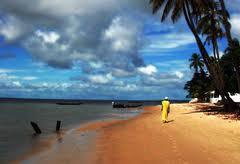 “Ce soir,” I told the driver who taxied us to the airport hotel, “il y a des hommes sur la lune.” I pointed to the moon above us. “Vous avez entendu de ça?”
“Oui, m’sieur,” he answered, humoring me. “Vous voulez engager mon taxi pour demain? Je suis à votre disposition.” But we did not need a taxi the next day.
From the balcony of our hotel room we could see the moon-whitened rollers of the Atlantic lapping at the edge of Africa. They sent balmy air and salty pungency toward us. And mosquitoes as well. There were two single beds and one mosquito net – and we were tired. Because I was the guy who had to write the stories, D insisted that I have the net. This is the kind of woman you want to take to Africa.
The next morning on my first day of being an Africa Correspondent on the ground, I felt pangs of inadequacy. It seemed impossible to get any news. The hotel kiosk was inexplicably closed. The American Embassy had declared a holiday. The room clerk had not listened to his radio that morning. I craned my body far over the balcony of our room, trying to catch breeze-blown bits of news in French from a radio playing somewhere below us.
To re-encounter Africa, Donanne and I took an ancient bus into Dakar. It stopped often and grew crowded with passengers pressing against one another. No one seemed to respect that which Americans hold so dear: personal space. The bus took us through Ouakam, a shantytown of wood and metal scrap, a home to peasants seeking urban survival and a better life, people who had fled servitude to a drought-plagued land. It was a place of the odors of decaying garbage, of cook fires and sweating bodies. Ouakam overwhelmed me: with its laughter, its color, with its communality, its vitality, its open-air sociability – and with its crowding, poverty and dirtiness. The smells, the heat, the closeness in the bus: all these afflicted me. Overload shut down my senses. My head swam. What, I wondered, was wrong with me? I had come to report on Africa and I was woozy with culture shock. Meanwhile, Donanne was grinning, drinking in the sensations, loving them.
We walked around the center of Dakar, a city of tall buildings and noisy hubbub. Despite the veneer of French culture from its colonial past, it pulsated with Africanness. I was glad to witness that again. My head stopped swirling. I interviewed some people, got reactions to a man being on the moon. We made arrangements to move the next day to a hotel in the center of town and took a taxi back to the hotel by the ocean.
Standing again on the balcony of our room I saw below me a woman walking in the hotel garden. She moved in clouds of cloth, within a yellow-patterned fabric wrapped about her waist. Above that a pink bodice floated. And above that was a blue bandanna of satiny sheen, elaborately tied. Slowly, sinuously, the woman drifted along with that matter-of-fact African grace. Watching her, I realized that I could use her. I would let her lead readers across that long bridge from ready acceptance of modern technology and astronauts on the moon into traditional Africa where news of the moon landing was being met with skepticism.
“Allah will not allow men to walk on the moon,” people were saying in Dakar. “The moon is sacred. Allah will place in the sky a facsimile of the moon. It will deceive the Americans.” They were saying: “The moon is hot. It will burn up any men who try to land on it.” They were saying, “These American astronauts are demons! They deny the existence of God!” They were saying, “Men on the moon? It is a white man’s lie. Haven’t they always lied to us?”
Welcome back to Africa! I wrote a piece about those reactions to Americans on the moon. It hit the front page, not necessarily because of its newsworthiness, but as a way for the paper to announce that it had a correspondent once more in Africa.

Frederic Hunter has written two novels and a collection of short stories about Africa: wwwFredericHunter.com.