Recycling a post first published in late 2010, Travels in Africa offers bits from 16-year-old Donanne Ralston’s letters to her grandparents. They were in California; she was in Port Elizabeth, South Africa. Donanne’s father Don Ralston was stationed there as the American Consul.
March 1, 1959
Dear Californians,
Am very pleased to have been invited to join the school swimming team so must practice every day for the upcoming gala over at the huge park pool.
I joined the Teenage Cultural Guild which meets every other Saturday and includes play readings, music appreciation and lectures of an educational sort. Quite a few of the area’s schools are represented. In September the Guild had a tea – we wore hats and gloves – where we presented to the Mayor a check for 100 pounds raised from a play we put on.
Our debate was fun: “Going steady is a disadvantage for a girl.” [Full disclosure: I went steady for about five months before leaving for South Africa. My friend kept after me and I finally agreed after he said I could keep the five dates I had already made with other guys, one to a ball at Annapolis, the others to senior proms.] For the debate I spoke in the affirmative. The other side brought up some reasonable arguments but for once I couldn’t agree. They said: ‘twas security, but I said: That comes from home during the teen years. They said: It’s nice to have a confidant. I argued: But a mother is a girl’s best friend AND confidant. And variety in dating makes for more responsible and well-rounded citizens. And so, we won 20-9, but I very sincerely doubt that we swayed anyone.
My school chums are getting excited about [Easter] vacation. One of the boarders invited me up to her sheep farm about 150 miles away during “the hols” [holidays], but as we are going hiking in the mountains at Hogsback, will have to take a raincheck. I’ll also be catching up on college reading and studying my French.
Well, here we are back from Hogsback where we stayed in a super cabin 6,000 feet up with indoor plumbing and a fine view and waterfalls all around. It reminded me a tiny bit of the Sierras. I got rather a lot of flea bites, but that didn’t stop me from exploring the forests with the other American family that joined us. On the way to our vacation spot Daddy made an official visit to Fort Hare, a college for non-whites. 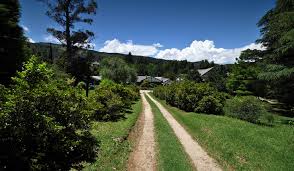 Where you hike in the mountains at Hogsback

June 21, 1959 (winter in South Africa)
Hi! Last night’s dance was super. I wore my red lace dress with red crinoline, red shoes, and red ribbon in my hair around a small bun. Since Friday was the last day of school, many of the university students are back from Grahamstown for a month’s winter holiday and a few were there last night. Consequently I danced nine dances with boys other than my date, which was unusual, but I was very pleased.
I’m sure mommy has told you of our new 19 yr. old church organist. Abie is sweet and very serious. Last Wednesday at church he was playing one of (or rather practising) Bach’s fugues and I told him that I liked Bach, so he said he’d play it during collection on Sunday night and hoped I’d come. It didn’t work out for tonight, so I went this morning instead of going to Sunday School and he played it. Afterwards he told me he had decided not to play it at the morning service, but changed his mind when I walked in. It was a really lovely piece containing lots of runs, etc. and I thought it was very nice of him.

Tuesday, June 30, 1959
We have just returned from a wonderful 5-day jaunt into the nearby countryside and down the coast.
Our first stop was Plettenburg Bay, about 80 miles west from P.E. It is a beautiful spot, and we stayed at the hotel on Beacon Island with a view of the mountains in the pinky-gray sunset, surrounded by blue sea splashing against sharp rocks. As we watched, some men fishing from the rocks caught three rather good-sized fish in 15 minutes.
The next day, on to George and the lovely hotel set in formal gardens just outside of town, with two gorgeous peacocks strutting around. We had heard of the Shoe Box in this town from a friend, so natch, we went. I got the only shoes that fit me – one pair navy with an attractive slit down the side, the other beige – both quite the highest heels (stiletto) and very cute. It’s the first time in my life I’ve been able to get such good-looking shoes. Mommy got two pairs, too. Daddy got the car greased.
The next night was at Oudtshoorn, the town famous for its ostriches and the Cango Caves. These caverns are supposedly among the largest and most spectacular in the world. They were huge all right! We had a cute guide who spoke in both Afrikaans and English. There were some mighty big rooms (caverns) and tons of ups and downs. At the end of the main explored part is “the chimney” lying down, but you have to climb a steep ladder to get to the entrance hole, then it’s about 30 feet on your stomach (obviously no turning around) until you get into the Ice Palace, then on into the Devil’s Cavern, THEN turn around and slither out!! We three didn’t go. I would have, except I was (like a goon) wearing a dress. I did climb to the top of the ladder and look in, though, and man, what a place! The guide said that sometimes he and a couple of other boys take flashlites and a bit of food and go exploring from 7:00 p.m. to 3:00 a.m. since vast portions have still not been explored. 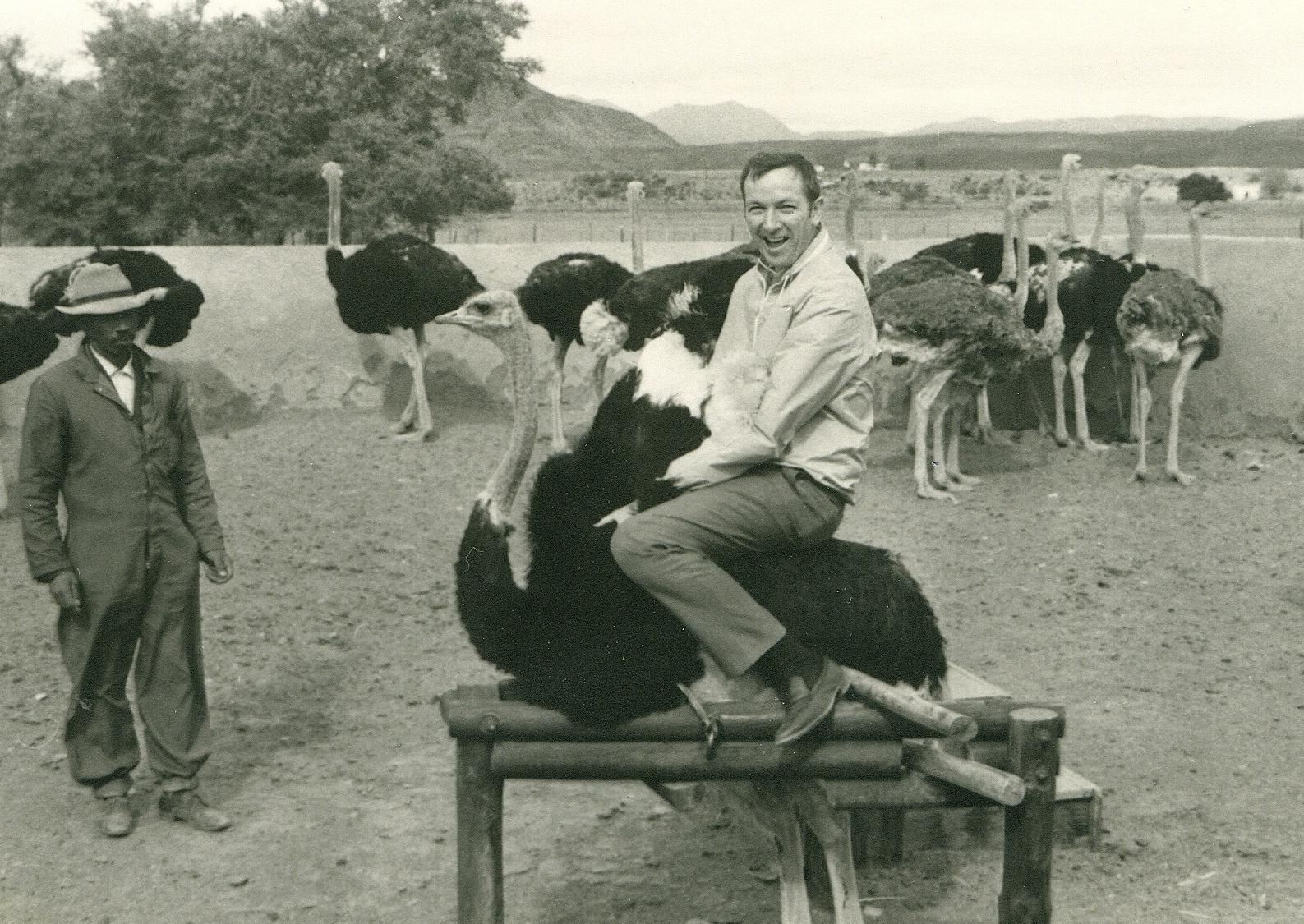 Some fools try to ride those critters at Oudtshorn

The next day was the ostrich farm. It was fascinating. Did you know that they live about 60 years, that they lay between 13-15 eggs each time, that the papa does the babysitting, that they take 42 days to hatch at a temperature of 98 degrees, that the shell is 1/8 inch thick and a 200 lb. man can stand on it without even scratching it, that the birds weigh between 200 and 300 lbs., that when an ostrich is mad you don’t have a fair chance because with one blow of his sharp toenail he can slit you from your guzzle to your zatch, that they have eyes that can see the full 360 degrees without budging, that the eyelashes are lovely, and that they are truly adorable creatures, and are not about to harm you unless of course you anger them? I sat on one but didn’t ride as there’s a special knack to falling off – or else! It was really loads of fun. Wish you could have been along!