The Hunters begin to make a life for themselves at the house seven miles outside Nairobi.

Donanne and I settled into the plantation house on Rosslyn Lone Tree Estate. Occasionally after a service, we would fill a jerry can of drinking water at the church. We began to entertain. New friends visited us at the house.

We did not really share our lives with Laban Waithaka Muturi. He spent much of his time tending the long, broad lawn. There was no mower. Laban cut the grass with a long-bladed implement having a curved and sharpened end. He stood upright, swinging the implement back and forth, slowly cutting the grass.

Sometimes I watched him and wondered how I would like that job. Laban had some education, at least enough to speak English. Didn’t this mowing crush him? Didn’t he find Lone Tree Estate rather isolated? What did he do for a social life? For friends? And yet, I would remind myself, Laban had a place to live and a job on the money economy. At least theoretically he was no longer tied to the land. That was considered a rather good situation for a young Kikuyu. Sometimes watching the man, I would wonder: Who is Laban anyway?

The more settled we became, the more we realized that seven miles out of town was really not all that convenient. It was more of a problem for Donanne who was stuck at the house than for me who used the car to chase stories. 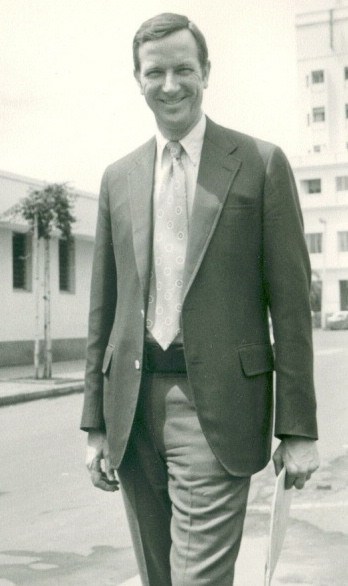 Fred, the story-chaser, in Nairobi

When we were in town at night, it seemed like a long drive home along a very dark road. One night driving home we had to slam on the brakes to avoid hitting an obstacle in the road. At first we were not sure what it was. Moving closer, we saw that it was a truck – no lights! – parked smack in the middle of the two-lane road. As we moved closer, we saw that the hood was up. Still closer we made out the haunches of an African bent over, messing with the innards of the vehicle. We crept past and sent a good thought to him and all drivers on that road.

Donanne dealt with the “kitchen that was not to be tolerated.” I will let her describe it: In retrospect it wasn’t that bad. It included the basics. A small fridge, a sink, a cooker, a few shelves, a light bulb – and a pothole in the middle of the cement floor. Filled with crumpled newspapers and covered with a woven mat from the bazaar the pothole in the floor mostly disappeared. The two-legged sink leaned against the wall under a window which opened onto the back of the property and through which a smiling Laban delivered tetra-pak milk cartons. The cooker was up a step in a shadowy alcove.

From the heights of its hooded vent came strange sounds that made one wonder what might fall into the cooking pot. Stirring semolina was not without its drama. Something did fall once, black and wiggly, but I don’t know what it was. When it arrived, I fled. Best of all, through the open windows of the kitchen and the rest of the house wafted the memorable fragrance of jasmine. We had no real grounds for complaint. After all, now we “had a [place] in Africa” if not “at the foot of the Ngong Hills,” (as Isak Dinesen wrote) at least on the road to Banana Hill.

After we’d been in the house about five months, the unexpected happened. We were notified that the widow in British Columbia had succeeded at last in selling the place. We would have to start house-hunting all over again.

If this posed a problem for us, it represented a calamity of sorts for Laban, for it meant that he would drop out of the money economy and have to return to the subsistence one. Circumstance would force him out of the urban world of Nairobi into the rural one of subsisting on his mother’s shamba.

But wait! Sub-Saharan Africa was an enormous beat to cover. Maybe it made more sense for Donanne and me to wander the territory for a time, visiting the countries I was supposed to cover and sending The Monitor reports about them. I proposed the idea to my editors. With extraordinary generosity they agreed. The housing allowance that I would no longer receive would help defray the costs of Donanne’s traveling with me. AS for Laban perhaps we could hire him again, once we returned to Nairobi.

So we said goodbye to the house at Rosslyn Lone Tree Estate and set out on eight months of travel.