TIA is back from a brief hiatus. Fred and Donanne spent the last three weeks in South America and can report that Rio de Janeiro and Buenos Aires are terrific towns, fascinating and very different.
Now to return to travels in 1970. The coffee plantation house we had briefly occupied outside Nairobi had been sold from under us. We were about to set out to explore the territory my newsgathering for The Christian Science Monitor was to cover. That journey would require eight months.
One of our first stops took us south of Kenya to what was then called Rhodesia. It was a place named by white settlers for Cecil Rhodes, a man of cunning and rapacity whom they inordinately admired. He had stolen the country from the Africans who lived there and gave it to the settlers for perpetuity.
“Perpetuity” had exhausted itself and was running out when we arrived there. Its death throes gave it a certain newsworthiness. After interviewing in Salisbury, as Harare was then called, I had stories to write. I needed a place to write them. So Donanne and I flew to Fort Victoria (now Masvingo). There I would draft my dispatches and we would take a look at the Zimbabwe ruins. 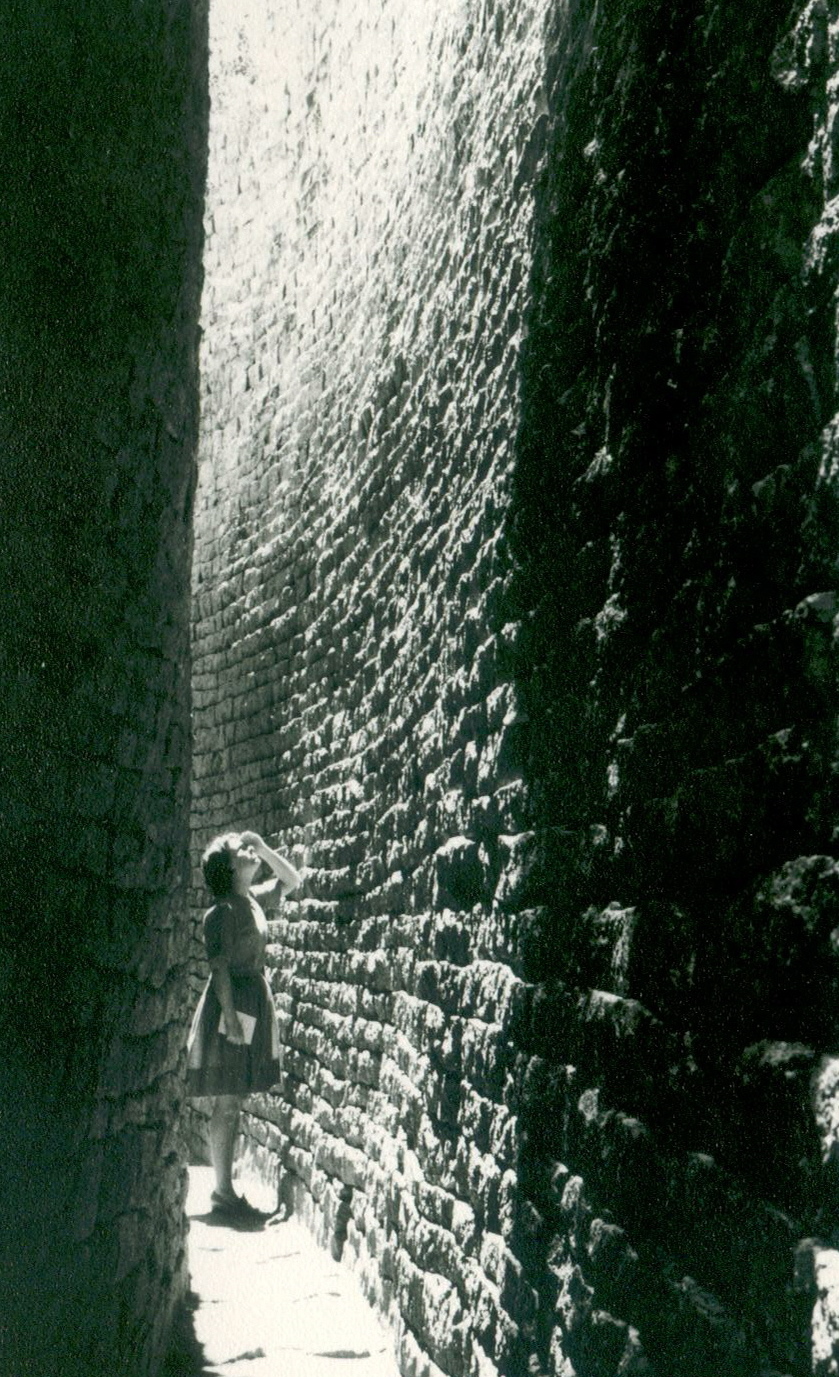 My diary shows that we spent two nights there. I drafted stories. Donanne typed some of them for transmission and I typed others. We had tea and took naps and we paid visits on three different days to the ruins which now give the country its name.
These ruins were like no others we had ever seen. At these ruins no one was around. Nobody bothered to visit. No one! We had the place to ourselves. On our first visit we walked over from the small hotel in the heat and immense silence of the African afternoon. On our left a small granite hill rose steeply. We could see boulders and outcroppings crowning it. And– Was that a wall? A giant wall?

The closer we got to it the more certain we were that it was not just a wall, but a series of walls, some of them twenty feet tall and made who-knew-how-long-ago with amazing craftsmanship. And without mortar. We realized that the hill was not simply terrain but an acropolis. Atop it stood not only the ruins of an ancient fortress, but a kingdom’s capital, too, and what must have been the abode of ritual chiefs. Below it stretched a maze of tumbled walls; they led to the Great Enclosure. In the valley stood a walled “temple” large enough to house a football field. A variety of ruins stretched in between.
Climbing the ancient ascent and passing through the cool darkness of the Great Enclosure’s parallel passage filled us with awe. 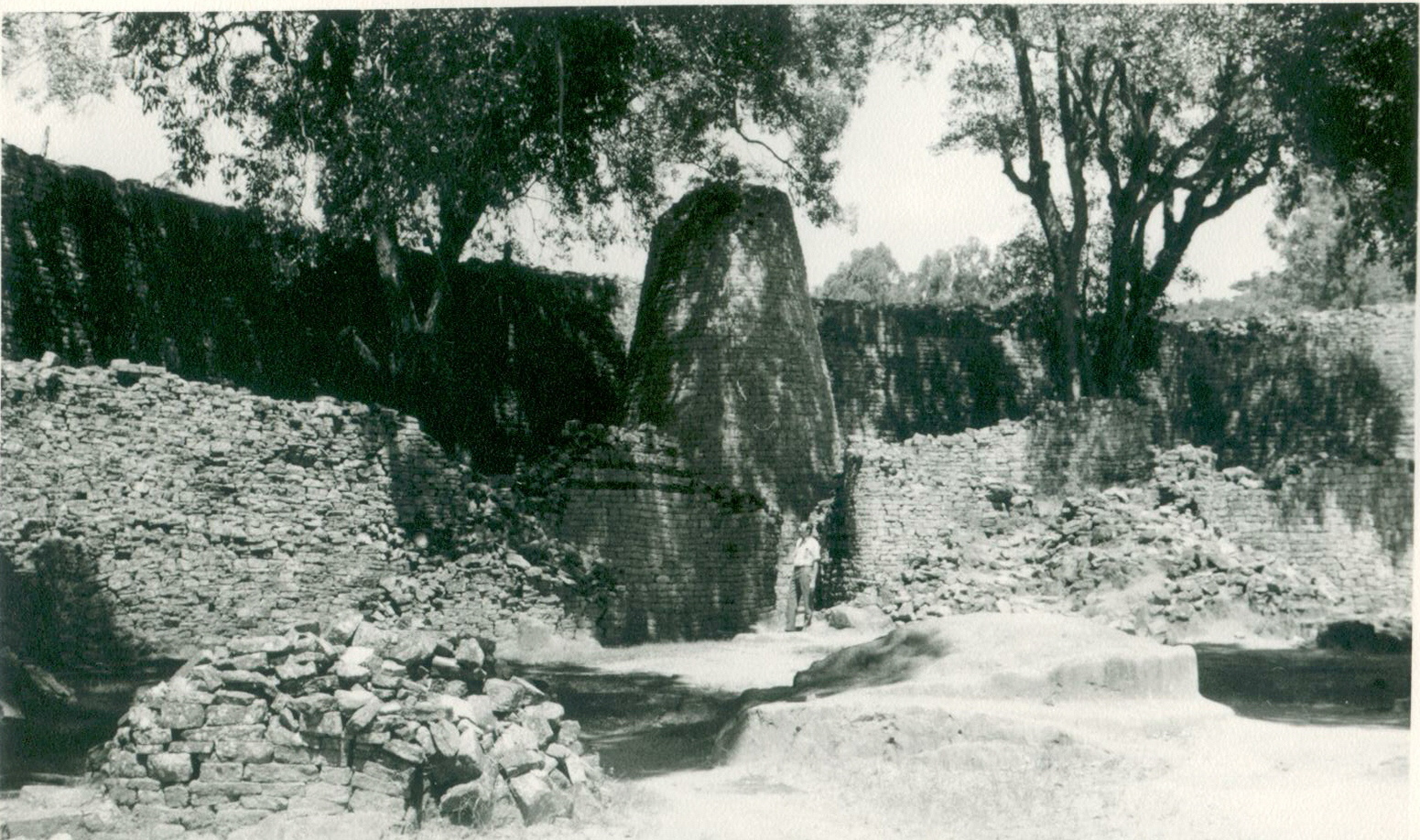 On subsequent visits we saw that the builders of Zimbabwe must have quarried the stone from peeling strips of weathered granite. These abound on the outcroppings which surround the ruins. Masons –working perhaps 700 years before, we had learned – must have heated the peeling stone, then abruptly cooled it with water, causing it to crack. Later they trimmed the stone and selected it for thickness. As a result, the layers of the walls were fashioned with a pleasing uniformity and stability.
In its heyday Zimbabwe must have been a splendid place, indeed. Its hilltop site was specially favored: protected from cold southeast winds in winter, but overlooking country that was nearly always green despite extreme dryness only a few miles away. Craftsmen had ornamented important enclosures with soapstone birds and other figures covered in gold leaf. 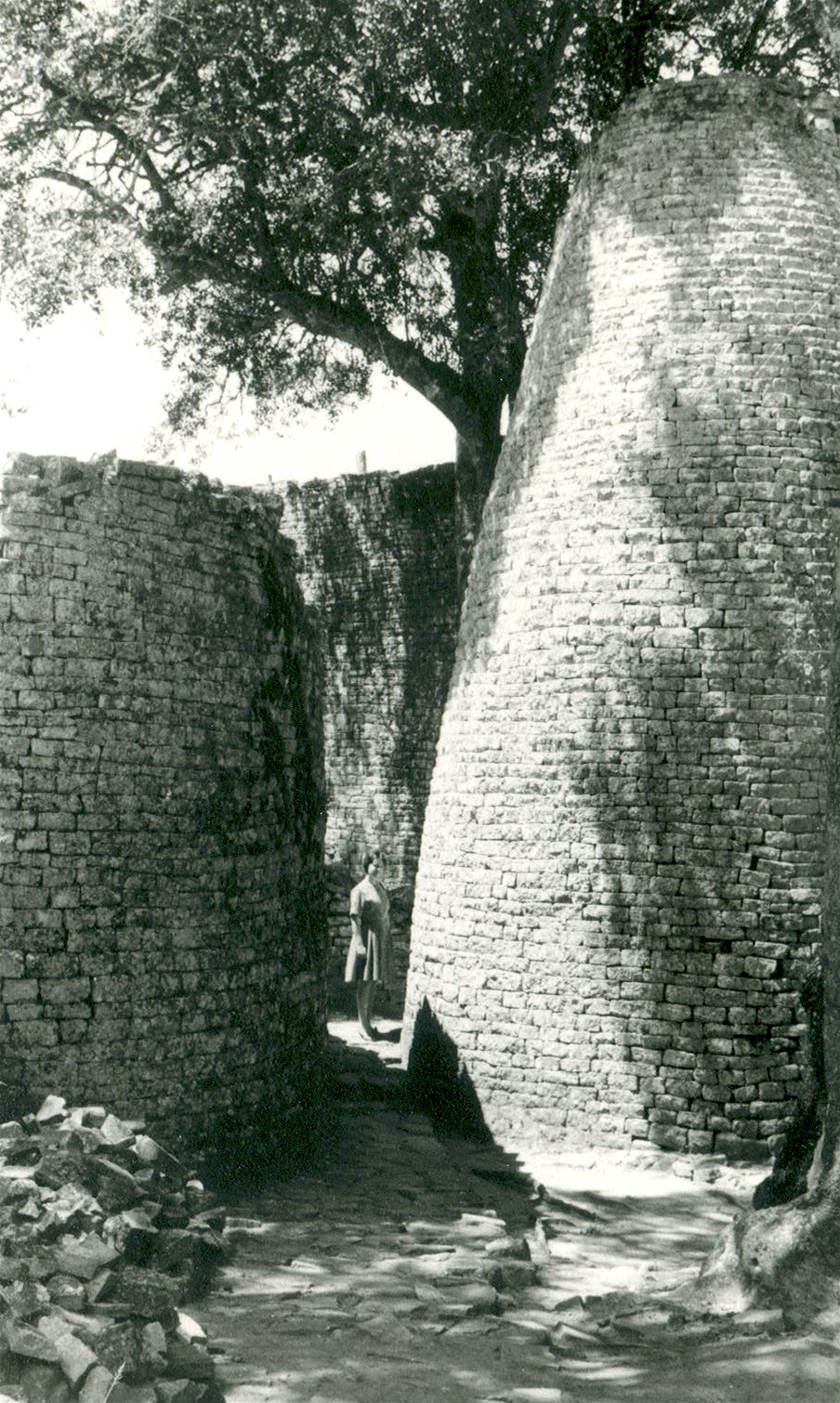 Gold work, bronze from the East, beads from India and Europe as well as Ming porcelain from China on display at the nearby museum showed that the community was a trade center as well as a chiefly capital. These trade goods tantalized our imaginations. What was Zimbabwe like in its heyday? How many people lived here? What were their occupations? Some were traders obviously. Caravans must have arrived regularly, not only with foodstuffs to feed the population, but also with merchandise from across the Indian Ocean and the China Sea. Those caravans returned with gold. What else? We could not help wondering at the extent of trade links and entrepôts that must have existed in Africa’s prehistory.
The African prehistory. Was there such a thing? A decade earlier when Americans were just awakening to the fact of Africa, most of them assumed Africa had no prehistory. If it did, they’d never heard of it. But here was evidence that it existed.
When the whites who so admired Rhodes first stumbled onto the ruins, they assumed that people they had so easily cheated could not have built monuments as marvelous as these. So they concocted fanciful explanations about who might have built them: Phoenicians, a lost tribe of Jews, or some other group of whites.
These days people just laugh at the fantasties of the white settlers. More folks are visiting the ruins of Great Zimbabwe. Few of them doubt that they are a monument to the African past. 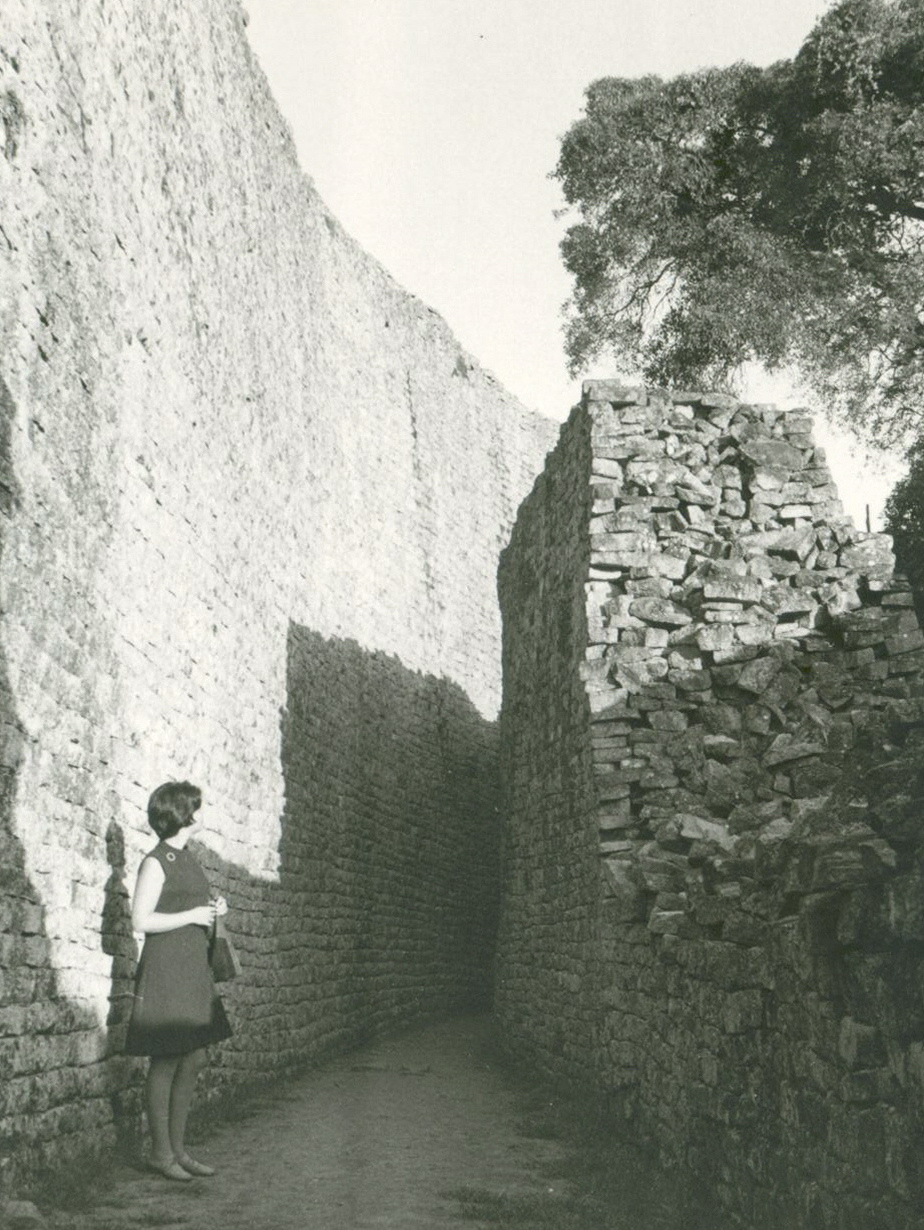