After two months in South Africa, it was time for the Hunters to head northward, pushed by the need to arrive in Kumasi, Ghana, for the enstoolment of the Ashanti king, the Asantehene. The enstoolment promised to be possibly the last of the traditional tribal durbars, and I did not want to miss it.
At the Lufthansa office in Johannesburg, I purchased tickets for Donanne and me to fly all the way to Paris; there we were to meet Donanne’s parents. Because black-ruled states – except tiny Malawi – had no official dealings with South Africa, we were routed first for an overnight in Lusaka, Zambia, which we would reach via Malawi. From there we had ticketed stops in places from which I expected to produce Monitor coverage: Douala, Cameroon; Lagos, Nigeria; and Accra, Ghana.
We flew on the French airline UTA to Douala. There we encountered difficulties. Our passports showed that we had stopped in South Africa. That being the case, we were told, we were not welcome in Cameroon. In fact, we were so unwelcome that officials took pleasure in ripping out the ticket pages that would send us along to Nigeria and Ghana and hurling them in the trash. They informed us that neither would we be welcome in those countries.
“Hey, just a minute!”
But, I was told, it was pointless to argue. We could not enter.
“May I telephone the Ambassador of my country?”
“No.” 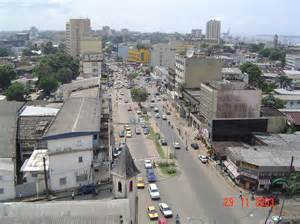 The Douala. Cameroon, we never saw

We were led aside to a room where we waited for the next plane to Paris. Our luggage was hauled off the ongoing flight to West Africa. Hummpf! (I never got back to Cameroon.)
What made this inconvenience especially galling was the fact that a nubile young American woman, early 20s, who arrived behind us in the queue had also visited South Africa. She flirty-smiled at the airport officials and they grinned back at her like the wolf in Red Riding Hood. They allowed her to enter and may very well have had her for dinner.
When the flight for Paris arrived, we were hustled aboard. I grumped all the way to that lovely city, wondering what my editors would think of my inability to get myself to West Africa. I knew they would not be happy about paying a second time for our travel to get there.
We arrived in Paris in a thundering rainstorm. It was the beginning of the tourist season. I wondered if we’d even be able to get a hotel room. We applied at the Accueil Service at the Aérogare once we finally got in from Orly.
Mais oui, Monsieur! There was a room for us on the fourth floor of a Left Bank hotel. Would we like to have a shower in the room? That would be formidable! Merci!
We took a cab to the hotel. As we were shown to our room, we learned that the men’s room was on our floor while the ladies was upstairs. Mais comment? We were told there was a shower in the room.
Eh, voila! There it was. A shower completely encased in a shower curtain stood smack in the middle of the room.
We laughed with astonishment and fatigue. At least we were in Paris. Now all we had to do was get ourselves a decent dinner and figure out how to get back to West Africa.