Readers of this blog are accustomed to reading posts about conditions in Africa some 45 years ago. However, things have changed considerably since that time – and in very positive directions.
It may be fairly well known that mobile phone usage has changed the way many Africans live. It has made communications links possible without the expensive infrastructure of landline telephony. It has changed the way farmers – still 70 percent of Africa’s population – deal with middle men.
Two recent articles have talked about other developments.
A cover story in the January 26, 2015, edition of The Christian Science Monitor Weekly was headlined Africa’s Solar Revolution. Its subhead asked: “The continent skipped landlines for mobile. Now can it bypass fossil fuel for sun power?” It’s online at www.CSMonitor.com. 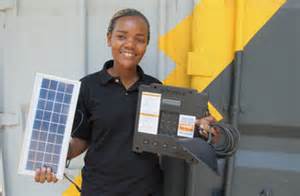 The story cites the experience of a Tanzanian family that was able on its modest budget to have installed “a fully functioning solar home system… enough to power several LED lights and a radio.” The householder had been spending $18 a month for kerosene; now she gets lights for $11 a month.
Says the article: “Until recently, the lack of electricity in many poor areas was seen as something of an inevitable fact of life… Now, however, a new solar energy movement is bringing kilowatts to previously unlit areas of Africa – and changing the lives of hundreds of thousands of people.”
It continues: “Others worry that the power offered by off-grid solar is too limited to answer Africa’s growing electricity needs. Most systems currently on the market only power a few lights and cellphone chargers, not energy-intensive appliances.
But it notes: “For many poor people, replacing a candle with an LED light is already transformative.” 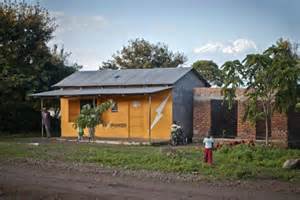 On the tin roof a solar panel not much bigger than an iPad – can you see it? – provides power to this building in Arusha, Tanzania

Meanwhile, on January 22 The New York Times published an article focused mainly on what the Bill & Melinda Gates Foundation is doing to help upgrade African agriculture. It was titled “Africa’s Economy Is Rising. Now What Happens to Its food?”
However, the lead paragraph read: “For decades, the economies of Africa were the world’s economic laggards. They aren’t anymore. Over the last decade, Africa’s per capita income has grown at a rate nearly identical to that of the rest of the world.” How long some of us have waited to hear that news!
The article continues: “With the world experiencing one of the greatest extended reductions in poverty on record, Africa has finally become part of the story. A middle class is beginning to develop in West Africa, from Ghana and Nigeria down to Angola. Some severely poor countries, like Ethiopia and Liberia, are at last making rapid progress.”
Article concludes: “It’s far too early to know whether the Gates Foundation’s attempts to (spur agricultural progress) in Africa will work.”
But: “Even so, Africa today offers an argument against fatalism.”
Progress seems to be on the move – and not a minute too soon.