The celebrations regarding the enstoolment in Kumasi, Ghana, were all about the Asantehene, chief of the Ashanti. In covering the continent I had read and thought a great deal about African chieftaincy. While chiefs had not ruled all Africans in the days before colonialism, the institution of rule by elders, many of them chiefs, had been well nigh universal.
Now I read specifically about the Ashanti. In the colonial era the British – who wanted Ashanti gold – had made Ashanti a Crown Colony. Now the nation-state Ghana had absorbed it. Once they came to power, most of the new African leaders, although ostensibly elected according to Western norms, took on the autocratic trappings of chiefs. Single party rule displayed outward forms of democracy – periodic elections, for example. But what persisted inside those forms very much resembled chieftaincy.
Our flight into Kumasi, the Ashanti capital, arrived late. A mad chase through a town full of celebrants into the city centre. There I checked in with the information officer and got us into our hotel. 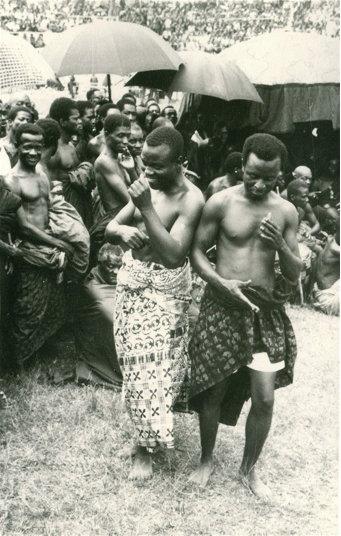 Then out to Pampaso for the first ceremony. An absolute crush of people there: the heat of their bodies, the smell of their joy and their sweat, the taste of anticipation in the air, the sound of drumming so insistent that everyone moved to its rhythm.
Hundreds of men awaited the new king, dancing, swaying, moving their arms. Most were wrapped in swirls of fabric, their chests naked, many with peaked hats adorned with gold, ringed with emblems fastened to them – some with necklaces and regalia of gold. Many wore bracelets or anklets of cowrie shells (a traditional African currency) or gold. Many of them held gilded staffs crowned with carved figures. 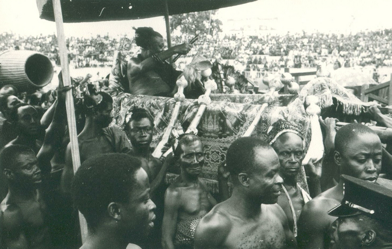 A chief arrives on palanquin

Opoku Ware II, the new Asantehene, arrived. He wore traditional cloth, rather like a toga, and – anachronistically – a wristwatch on his arm. Attendants eager for the honor bore him on a palanquin, a splendid cloth-draped litter, carried shoulder high, sheltered by an enormous umbrella. Attendants waved large raffia fans to cool him. Escorting the new king were middle-aged courtiers. Frenzied chanting and shouting greeted him. The new Asantehene was taken to a small building attended by ritual functionaries. 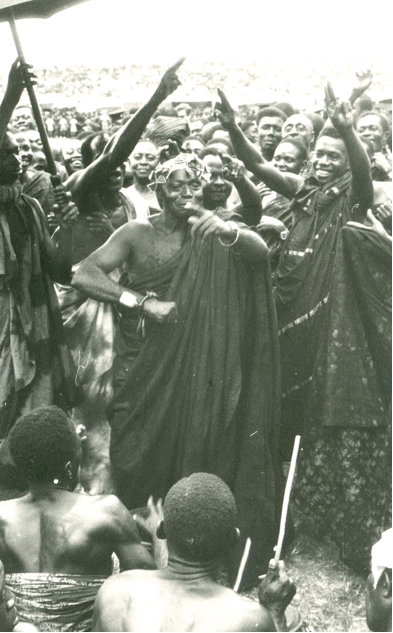 Outside the building, chiefs and their retinues waited in tense excitement. Porters with ritual regalia – staffs, swords and gilded symbols of chieftaincy – laughed and chatted and raised their arms in gestures of allegiance.
Suddenly the Asantehene himself burst from the small building. Drums again struck up. Holding a sword and shield, the Asantehene danced in a tight circle of men. From a collection of individual bodies the crowd fused into a single mass of dancing flesh. It surged forth, jumping, pushing. A Rolls Royce awaited the new king. He danced toward it. Eventually he reached it. As an attendant wiped sweat from his neck, the new Asantehene entered the car’s sanctuary and was driven away.
There was more to come in the evening. But now it was time to get out of the heat.