Putting together these accounts of travels in Africa, we realize that there is no account of a trip to Nigeria. This is a curious oversight because Nigeria is surely one of the most important countries of the continent, a place of immense human potential. Nigerians will tell you that one African in every six is a fellow countryman, that one black person in every seven is a Nigerian. Omitting Nigeria is also curious because we visited it a number of times.
The obvious explanation is that despite several visits to Nigeria no letters or accounts of trips there – if these ever existed – has survived repeated moves over the years.
The less obvious explanation for not writing about Nigeria has to do with its being a very perplexing place. Nigeria is chaos masquerading as a country. Visiting it requires one to run a kind of gauntlet. Nigeria is full of color, full of disparate ethnicities and languages, full of noise. It’s a place brimming with vitality and contention. Everyone seems to be shouting. In the south it can be a place of intense humidity and heat. Here dogs chase cats at a walk. A stroll through Lagos quickly raises a skin of perspiration over one’s entire body.
During my tenure as The Christian Science Monitor’s Africa correspondent, the paper published several special reports devoted mainly to examinations of a single country. Because it had just survived the Biafran insurgency, the failed attempt of the Ibo people to form the country’s southeastern region into a separate nation-state, I wrote one of these special reports about Nigeria.
As I remember – and memory can be faulty, not that it matters much – Donanne and I flew into Kano in parched, Muslim northern Nigeria. There we joined forces with Monitor photographer Ed Pieratt. Kano was the city where riots by the dominant Hausa-Fulani people of the North against the immigrant Ibo, the dominant people of Nigeria’s southeast, the region later called Biafra, had left hundreds dead and had sparked the tensions that led to civil war.
Inter-ethnic riots still occur today and to make matters worse in the northeast. Boko Haram holds sway virtually unchecked. 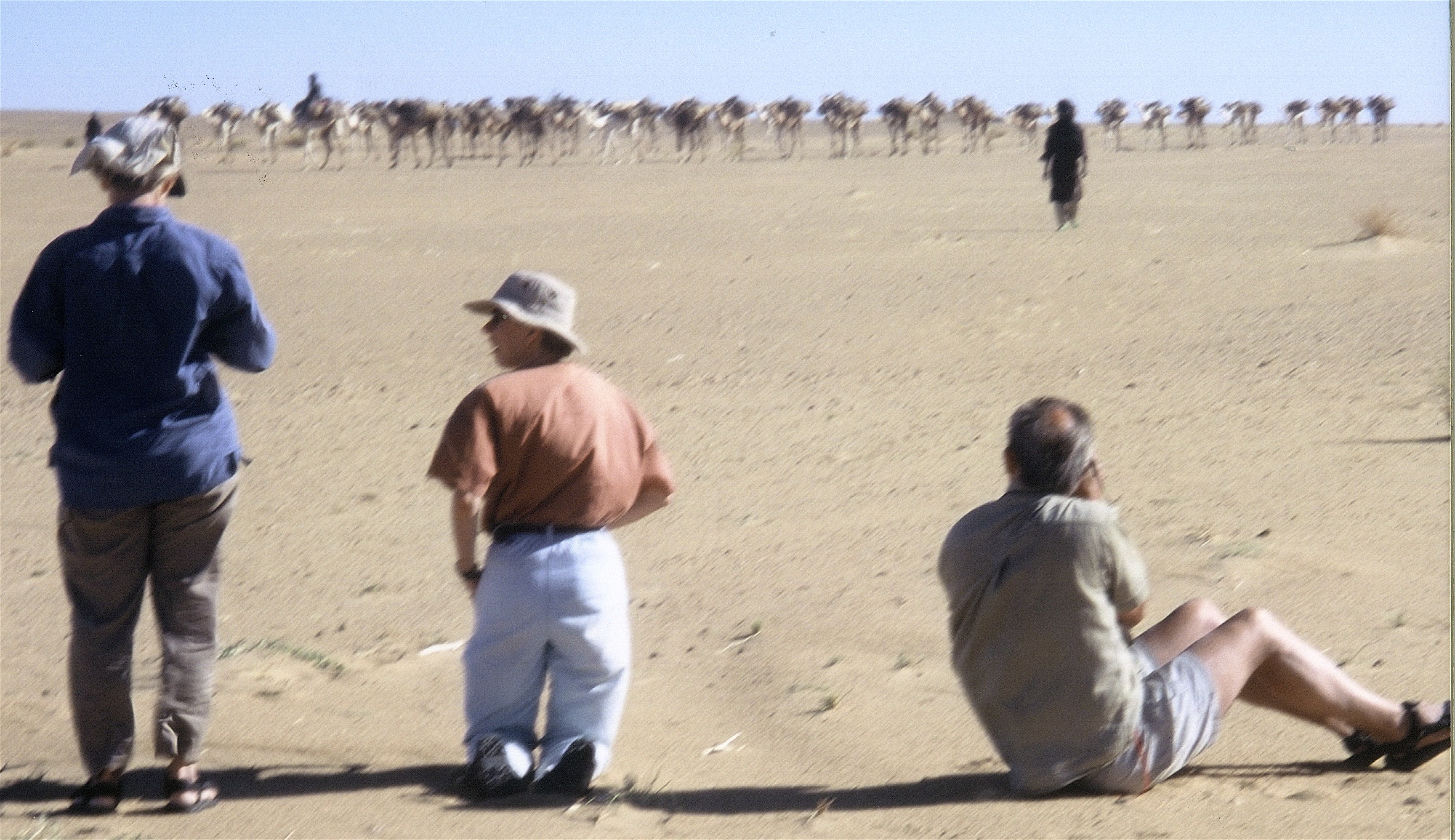 Watching camels walk out of the Sahara, but in Niger, not Nigeria

Some short recollections of that trip: In Kano Donanne and Ed went off to the market at the edge of the city to watch caravans of camels arrive from their trek across the Sahara. Meanwhile, I applied in person at the palace of the Emir of Kano, hoping to secure an interview. The Emir did not see journalists. A peek into his palace and at the bureaucrats manning his administration proved instructive. However, I would have much preferred to observe camels emerging out of the Sahara.
Hotel space in Nigeria at that time was always scarce. Donanne, Ed and I arrived together at the hotel in Kaduna. There was only one accommodation, a suite of two rooms. We immediately took possession of it. Ed slept on a couch in the parlor; Donanne and I shared the bedroom. A happy arrangement – better than wandering the city looking for other places to lay our heads – but the expressions of the hotel staff suggested that they took us for a ménage-a-trois.
Somehow in Kaduna Donanne and I were invited to a cocktail party. A tall, handsome Nigerian, gleeful in the pink agbada that accentuated the dark luster of his skin, greeted Donanne in an immaculate Oxford accent. “Hello,” he said. “I’m the local witch doctor.” Such people are attractive and charming.