Donanne and I arrived in Bamako, Mali, in late 2001, setting foot in Africa after an absence of thirty years. Delighted to be back on the continent, we found the sensory overload to be joyous, immediate and overwhelming.
But the recollection that keeps returning now and then from those few days in Bamako, before we set out with a Dogon guide and a Bambara driver to explore interior West Africa, had nothing to do with the scent of spices, or the yakking of market women hawking wares in the sun, or the sight of the Niger River flowing below us as we ate our breakfast on the dining barge of our hotel.
Rather it was something else: the thrill I received in a government building, looking through a display case, at a letter – in immaculate penmanship – from the British Consul General in Tripoli on the then Barbary Coast, a man named Hanmer Warrington. Memory does not serve me well as to the subject matter of the letter. That’s because imagination serves me so much better. The date – was there a date? I don’t remember – may have been the late 1820s. The letter may have been seeking information either as to the whereabouts of Major Alexander Gordon Laing, Warrington’s explorer son-in-law, or about the journal of his expedition to enter the fabled city of Timbuktu.
Donanne and I visited Timbuktu in 1970. It was a place you wanted to boast of having experienced in order to hold your own at dinner parties. I wrote a long piece about it and Laing as a correspondent for The Christian Science Monitor.
Hanmer Warrington served as Britain’s man in Tripoli for over thirty years. He helped launch several expeditions that departed from Tripoli, seeking to find Timbuktu and/or the course of the Niger River. (Differing reports made it impossible in the early 19th century for Europeans to know exactly which way the river flowed and where it emptied into the sea.)
Since Warrington had some scrapes with the Foreign Office, it’s baffling that he served so long in Tripoli. But his wife Jane-Eliza Pryce may have, in fact, been the illegitimate child of the Prince Regent, later King George IV. That provides the likely answer.
I came to know of Hanmer Warrington through the story of Gordon Laing. Explorers were the rock stars of the era, men of enormous glamour and charisma. Major Laing arrived in Tripoli to undertake a Timbuktu mission in May, 1825. By early July he had asked Warrington’s’s daughter Emma to marry him. Warrington must have been aghast. (And no wonder! How would you like your daughter to tell you she’d received a marriage proposal from Mick Jagger?)
When Emma asked Papa for his blessing, Papa said No! Laing and the horrified consul broke off speaking relations; the suitor camped outside the city. Ultimately Warrington granted the couple permission to marry, but only on the condition that the major pledge – in writing – that he would not consummate the marriage until he returned from Timbuktu. The major agreed. (Now we are aghast. We hope he had the sense to break the agreement. But as a British officer and gentleman probably he did not.)
Two days after the ceremony he marched into the desert.
Circling around a local civil war, Laing got to Ghadames. He spent days negotiating the onward journey with guides who demanded ever more money. He received inquisitive stares, doctored local inhabitants, was pestered for handouts, hungered for mail and burned with love for his bride.
He pushed on. He reached an oasis called In Salah. There he was such a curiosity that he had to nail up his door. As a Christian among Muslims, he also feared for his life.
The Laing party joined a large caravan. News of the major’s presumed wealth preceded the caravan as it ventured nervously through country known for civil wars, feuds and marauders. Ultimately Tuaregs followed the expedition for five days. Before dawn on the sixth day they attacked the explorer’s party. Laing sustained multiple wounds, the loss of several subordinates and the theft of virtually all his funds.
The caravan continued, leaving the wounded Laing to follow as best he could. Finally a Tuareg chief’s son agreed to take the scarred and impoverished explorer to his destination – in exchange for all his possessions. The major entered the fabled city thirteen months after he left Tripoli. The only surviving account of his findings and impressions is a short letter. It tells almost nothing. 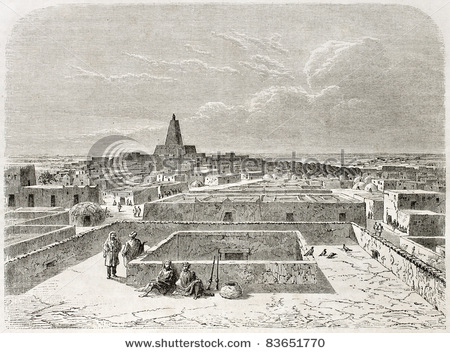 Timbuktu as it may have looked to Gordon Laing

Due to personal danger, Laing is thought to have sent his journal back to Tripoli by messenger. Speculation exists that it fell into the hands of the French consul in Tripoli, who destroyed or suppressed it for reasons of nationalistic pride. The major himself joined a small caravan headed for Morocco. Three nights out the caravan’s leader murdered him.
So that is why Warrington’s letter on display in Bamako 175 years later fascinated me. Was it seeking information about Laing or his journal? I like to think so. About all I really remember is that Warrington wrote a very fine hand.