Teri Gabrielsen, a tall, willowy and glamorous educator with long blond hair, does not look like anyone’s idea of a social change agent. But speaking before us, wearing Maasai jewelry and an ankle length brown dress, made for her by Maasai women, and decorated with Maasai beadwork, you think, Well, maybe. Then when she tells her story, you think, Oh, wow!
Teri’s one of dozens of people, mostly women, around the world who discover people who need assistance and suddenly find themselves organizing and leading groups to help them. God bless them! TIA salutes them all. 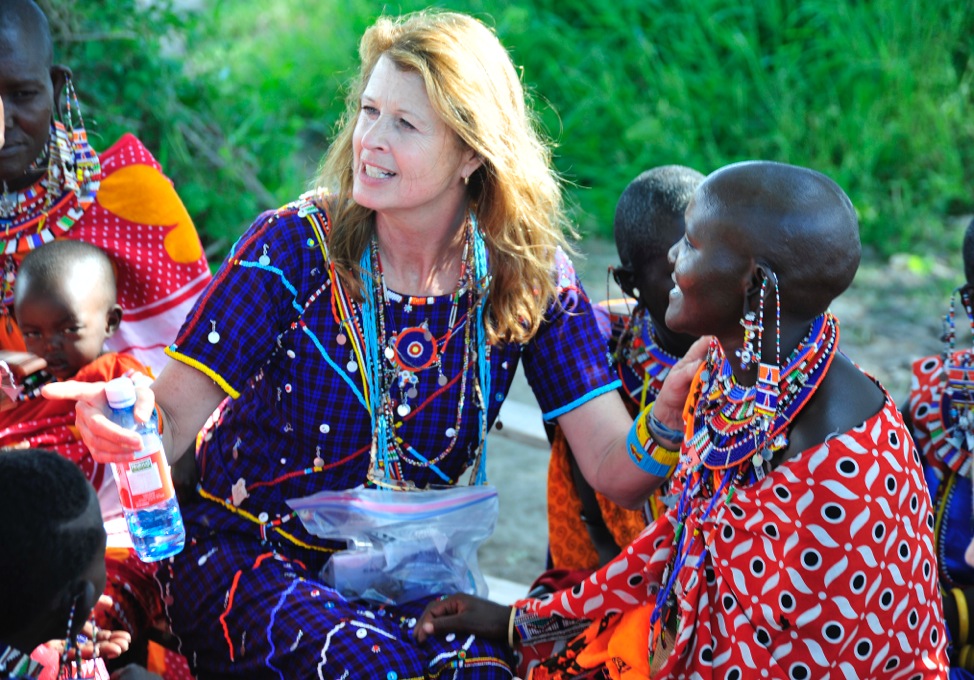 Teri told her story in a TIA post several months ago. I’ve attached it to the end of this post; those interested can find it there.
Basically, the story is this: Teri and her family took a Kenya safari some 17 years ago. They met a young Maasai James Ole Kamete, then 27, with an eighth grade education. He proudly showed them the school he had started. It was five boys with Kamete as instructor sitting in the shade of an acacia tree, forming letters and numbers with sticks in the dust. Teri says, “I knew I would be going back.”
Ten years later, her own children grown and mostly educated, Teri returned to Maasailand. She began a successful effort to build a real school, staff it with competent teachers, fill it with students, girls as well as boys, and find the financing to make it work.
Africa Schools in Kenya (www.ASKenya.org) was founded in 2007. It saw its task as “listen, listen and listen,” so that it was helping the Maasai of Esiteti achieve what they wanted. Early on, an educated Maasai came to the community and spoke of two things the Maasai, who are herdsmen, badly needed to do.
First, the focus of their cattle-raising needed to change from an emphasis on quantity to one on quality.
Second, they needed to upgrade the status of their women, specifically by ending the age-old practice of what’s known as female circumcision, more accurately designated female genital mutilation (FGM). ASK was all for helping that happen.
But the idea of eradicating the practice raised a lot of questions. If girls were not “cut,” would they ever be accepted in the community as women? As wives? Was it not true that cut women were more fertile? Healthier? If girls were given education and learned that the practice was unnecessary, would they agree to it? If the practice were curtailed, what kind of coming-of-age ceremonies could be devised that would retain that aspect of initiation in which young girls were instructed in what it meant to be a Maasai woman?
Gradually, with ASK’s help, the people of Esiteti began to ponder these questions. No, cut women were not healthier. Nor were they more fertile. In fact, some girls were known to bleed to death as a result of the cutting. Some fathers were upset to learn that the practice was exposing their daughters to real danger.
Yes, over time it would probably be possible for local Maasai to accept uncut girls as women, especially if they went through an alternative initiation. An Alternative Rite of Passage (ARP) was designed.
Now at puberty the first girls are going through the alternative initiation. It’s not yet clear what happens to a 17-year-old uncut Maasai girl who is finishing high school at Esiteti, who has gone through ARP initiation. In the old days she would have been traditionally initiated and married off at 14. But the society will have to accommodate itself to such young women.
Is it possible that what has succeeded at Esiteti can be transported to other Maasai communities? If so, that transportation might provide, at least for a while, jobs as facilitators in the new initiation for graduates of the alternative. Their mothers, initiated in the traditional manner, are probably not the right women to act as facilitators.
Maasai have long wanted to preserve their traditional way of life. Moderns living in Kenya, as Donanne and I did 40 years ago, have long doubted that this would prove possible. It’s exciting stuff to watch a transition begin to take place. Especially a transition that has been the result of listening, listening, listening.
It’s impossible to deny that change is coming. At Esiteti girls are flocking to alternative initiation. Teri Gabrielsen reports that four Esiteti high schoolers have received scholarships for college. Esiteti Maasai have begun to wonder if the new initiation can be replicated elsewhere in Maasailand. Direct Relief, a Santa Barbara medical relief organization, is teaming with ASK. Foundations are beginning to pay attention. 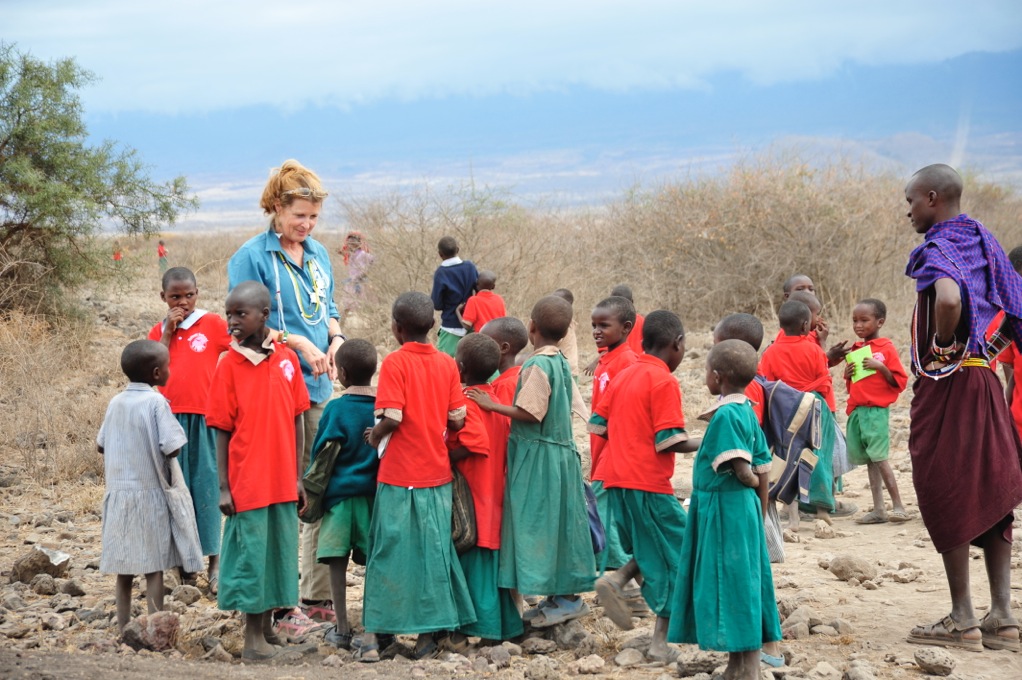 Teri with scholars at Esiteti school

And all because a young Maasai wanted to show his school to travelers and the travelers paid attention.

Growing up, I never thought I’d do anything other than teach. Every relative on my mother’s side either taught elementary school or at a university. After receiving my teaching degree, I taught at a local school for three years, and always had this yearning to travel to far away countries and teach in a culture that was completely foreign to me. My fantasy was to be among indigenous children, far less advantaged than myself, and teach what I could in order to advance their lives.

When our two children were eight and ten, their world-traveling “Nana” loved Kenya and invited us all on safari. Although Kenya is abundant with wildlife and landscapes with snow-capped mountains and sandy beaches, it is the people I eventually learned to love. Tim Melesi of Tim Melesi Safaris had hired an industrious 27-year-old Maasai, James Ole Kamete, to find the best animal viewing while on game drives.
Sitting on the roof with Kamete was one of my highlights, talking with him in broken English or just sitting together in silence. Over the course of ten days, Kamete shared with me his dream of starting a school someday. During Kamete’s childhood, the British government required at least one person in each village to attend school. Kamete was selected, and his wealthy uncle paid his way through eighth grade. Kamete felt blessed and decided he needed to give back. He wanted to start an elementary school for his village and the surrounding communities.

On our last day on safari, Kamete invited us to visit his village and see his “school.” When we arrived, Kamete was under a large acacia tree with five children writing the alphabet with sticks in the dirt. I was never so sure what my life work would be until that moment. Then I KNEW what I had to do.

I told Kamete I’d come back in ten years when my children were in college and help in whatever way I could to fulfill his dream. In 2007, Africa Schools of Kenya, or ASK, was formed, a non-profit 501c3 organization headquartered in Santa Barbara, CA. ASK has overseen the construction of school buildings. It has provided funding and facilitated and underwritten the development and implementation of specific educational programs. These encourage building awareness on critical global issues such as healthcare and healthy living, environmental and financial sustainability, animal and wildlife conservation, and cultural diversity.

In the area of healthy living we’ve made important progress. Over years, we have had many conversations around the health risks of female genital mutilation (FGM) and early marriage. For over 500 years now, the Maasai people in Kenya and Tanzania have traditionally performed the ritual of FGM signifying a girl’s rite of passage to womanhood. While ASK slowly taught the girls about the myths and misconception of FGM, as well as the health risks of FGM and early pregnancy, a change started to happen from within the Esiteti community.
In April of 2012, the community had their first two-day Alternative Rite of Passage, or ARP, using Maasai facilitators with 57 female participants. There are now over 240 ARP graduates, and three two-day ARPs are performed, each year. The most recent ARP had four student participants from the local community and 18 from neighboring areas of the Kajiado district.
ASK also underwrites six other programs, including mobile health clinics coordinated by Dr. Elizabeth Toro, an OBGYN and board member of ASK and Direct Relief. Testing for HIV is also provided followed by a monthly anti-retro viral treatment program, which is ongoing.
Scholarships are provided to qualified students starting in 4th grade through 12th grade. ASK subsidizes teacher training certifications for the uncertified teachers, as well as, cross-cultural exchanges with schools all over the world. ASK developed an income stream for the women contracting 280 women, to make large quantities of traditional Maasai jewelry using fair trade standards. Esiteti Primary School is currently self-sustaining because of the sales of the beaded jewelry program initiated by ASK. There over 25 retailers across the U.S. selling Maasai crafts and are sold throughout the U.S. The bead business is now handled by Beads of Esiteti (www.beadsofesiteti.com).
Today, Kamete is the founder of a six-classroom state-of-the-art elementary school. The children have insatiable appetites for knowledge, and what they learn, they pass on to their parents who are illiterate. Esiteti Primary School has 360 students from ages 4 to 15 years. Six of the ten teachers are certified and were provided by the Kenyan government. A girls’ boarding school houses 57 girls year round. It provides a safe haven for the girls living far away from home; and it protects them from animal attacks, rape, taken as wives, or families forcing them to participate in the ancient ritual of FGM and early marriage. The remaining boys and girls live near the school and walk home each day.
Teachers are responsible for following the Kenyan curriculum, yet there are very few textbooks at Esiteti School. English and Swahili are the two of the three languages spoken, and Maa is the tribal language. Starting 4th grade, hundreds of students receive scholarships through high school. This program is sponsored by ASK and over 240 student sponsored. High school tuition can be cost prohibitive for student’s parents without some financial support.
I’ve found that so much can be accomplished for the good of people if they just do something. So little goes so far when working with people that have so very little. For example, $240 a year or $4.50 a week can give a child an education enabling him to think for himself. That’s the price of a Starbuck’s Frappuccino. The U.S. and Kenyan team for Africa Schools of Kenya are proud to be approaching their ten-year anniversary working with the Maasai in Kenya.