In 2014 Abderrahmane Sissako, a Mauritanian filmmaker, made a movie in Mauritania with Mauritanian government financial support. It shows breathtakingly beautiful scenes of the Mauritanian landscapes, Mauritanian wildlife and Mauritanian people.
It is perhaps counterintuitive that the movie should be titled Timbuktu. That city is some distance away in neighboring Mali. But there are reasons for using that title. One of them is that people have heard of Timbuktu; many of them have never heard of Mauritania.
The opening shot of the film shows a sleek desert gazelle running, frightened, across dunes. The camera pulls back to reveal that it is being chased by jihadis in a white van, flying a black flag. They intend to run the gazelle to exhaustion just as, the film seems to say, they intend to exhaust the peoples of the desert whom they have come to rule.
Another shot at the beginning of the film shows Bambara statues, fraught with religious significance for desert peoples, lined up in the sand. The jihadis shoot them up, desecrate them with bullets, just as their guns give them the power to alter the lives of the people they intend to rule.
Travels in Africa devotes a post to this film for several reasons. Maybe primarily because it is not easy to get a look at Africa in movies that respect it and show its beauty as this film does. Also because it refers to a situation in recent African history – 2012-2013 – when the city of Timbuktu was overrun, first by Tuaregs with grievances against the Malian government, then by jihadis, Islamist extremists associated with Al Qaeda in the Maghreb who inflicted upon the citizens of Timbuktu a fundamentalist form of Islam. The film offers an African – or perhaps better, a Mauretanian – perspective on these events.
Reviewer A. O. Scott of the New York Times called the film: “Not just a timely movie, a great one… Timbuktu feels at once timely and permanent, immediate and essential.”
What’s the movie about? We watch jihadis come into a town in vans and on motorcycles. Using a loudspeaker, one of them proclaims all the practices that are henceforth interdicted: smoking, playing music, playing football. Women must wear gloves and hijabs. Etc, etc, etc. We watch a loose soccer ball tumble down the stairs of a mud street. No one claims it. The boys of the town continue to play football (soccer) with an imaginary ball. It’s a beautiful sequence.
We see a shaman or witch parade through the town in a colorful green dress with a train of gray cloth behind her. She carries a rooster and the jihadis keep their distance. We see an imam stand up to the jihadis, scolding them for twisting Islam into an unrecognizable form. The jihadis listen and say little other than that their form of Islam is now in ascendance.
We see a jihadi soldier palavering to make a wife of a girl of the town who has caught his eye. Her mother opposes his presumption. But the head jihadi authorizes the marriage.
We hear music at night. A young woman sings alone in a house with three male musicians. The jihadis arrest her, condemn her to receive 40 lashes for singing and another 40 for being unchaperoned with the men. We see them delivered.
We see a man and a woman buried to their necks and stoning begins.
We hear bits of dialogue in French, in Arabic (bad Arabic apparently; there are complaints about it), in Tamasheg (the Tuareg language) and even in English. The characters are Berbers, Tuaregs, and Sahel Africans with jet black skins. 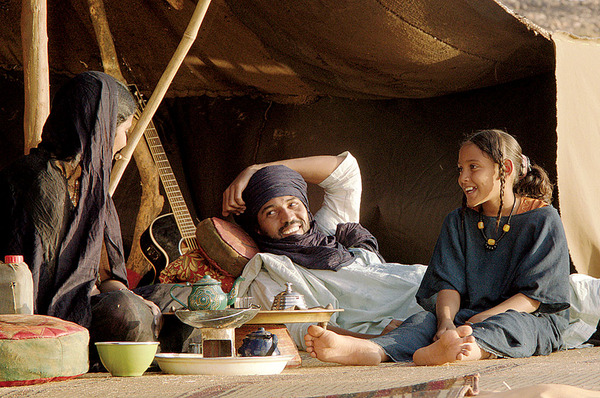 Kidane and his family in their tent

The main story is about Kidane, a herder who lives in a tent outside the town with his wife and daughter, his only child. A herd boy who watches Kidane’s herd of eight cows leads them to drink in a wide, flat river where Amadou uses nets to fish. The boy loses control of a cow, amusingly called GPS. She becomes entangled in Amadou’s nets. Amadou throws a spear at GPS, killing the animal.
Hearing of this, Kidane goes to confront Amadou, carrying a pistol, despite his wife’s objection. The pistol is loaded and cocked. Kidane and Amadou do not palaver; they immediately set to fighting. The pistol goes off. Amadou is killed.
This is an interesting plot development because it has nothing to do with the jihadis. (Is this Sissako’s way of noting that life and its problems go on regardless of jihadis’ presence?) However, now having taken responsibility for maintaining public order, the jihadis arrest Kidane for murder. With resignation, bolstered by religion. Kidane accepts that he must be executed for this crime.
The movie gives a wonderful sense of the pace of African life, the beauty even of a harsh landscape and the African resignation to Fate. The treatment of the jihadis is different from what one would expect from American media, from an American film.
If Timbuktu, the Mauritanian film, an Oscar nominee, comes your way, you might want to take a look.

Coming soon: A YEAR AT THE EDGE OF THE JUNGLE, Fred Hunter’s memoir of going alone to serve in Coquilhatville, a jungle-bound river port in the remotest part of the Congo. A thrilling read. A dangerous assignment. 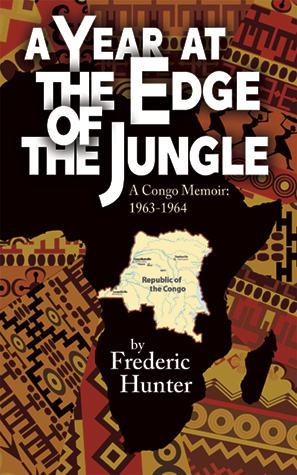