Most travels in Africa begin in the imagination. Certainly mine did. This happened when I was about ten. I became intoxicated by Tarzan movies.
That period is brought to mind by the fact that Turner Classic Movies showed “Tarzan and His Mate” last night. TCM was honoring art director A. O. Gillespie whose skill played a crucial part in making it possible to create a credible semblance of Africa on a Culver City backlot. And also create a myth for ten-year-old boys.
Of course, I watched the entire film. Can there be anything more beautiful than Tarzan swinging through the trees on vines and ropes? Not to the imagination of a ten-year-old boy. Johnny Weismuller, who will always be my Tarzan, was the winner of five Olympic gold swimming medals, swam like a dream, jumped around trees like a gymnast, rode on the backs of elephants and rhinos, fought lions and bad guys and crocodiles in a tank dressed out as a jungle river.
In “Tarzan and His Mate” there is a lovely swimming sequence in which Weismuller swims with a beauteous and quite totally naked Maureen O’Sullivan who played Jane. Jane grabs onto Tarzan’s ankles and they’re off.
I do wonder if a fascination with Tarzan from ten to maybe thirteen served as any preparation for being assigned to the Congo as a USIS officer a decade and a half later. Probably.
In any case here’s what I recollect of that ten-year-old’s addiction:
In the mornings my twin brother Bob and I would clunk down the back stairs into the warm kitchen. Tootie would be at the stove stirring Cream of Wheat, and Dad would be sitting at the drop-leaf breakfast table reading the Los Angeles Times.
We would scrunch down on the linoleum floor next to Rusty’s box, ask for and receive the paper’s second section and hastily turn to the entertainment pages. We would scan the movie ads, hoping, hoping…
No more than once a year were our longings fulfilled. But how happy those once-a-year mornings when the first ad appeared for the new Tarzan movie. Joy exploded inside us. Our spirits soared. 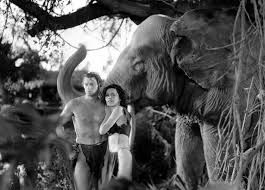 We knew this new Tarzan was on its way. Movie capital kids, we kept abreast of such things. Where other kids read comics, we read movie magazines: Movie Story, Photoplay and others whose names I’ve forgotten.
We devoured them at the magazine stand at the Thrifty Drug Store at Cochran and Wilshire: two kids sitting Indian fashion, avidly thumbing through the latest stock before the salesgirl, knowing no sale would be made here, would tell us to push on.
Because of this reading, we would know that the new Tarzan had finished production and was coming out soon. We’d begin to watch for ads in the paper. Then when they came: Ahhh!!! At last! Something to live for!
After breakfast we would toss on our leather jackets, fasten our schoolbooks to the carrying racks, jump onto our bicycles and exhilaratedly pedal the three miles to school. We’d sit back, riding no-handed, and talk giddily about the ad that had finally appeared.
Growing up, Bob and I suffered deprivation. We could go to the movies no oftener than once a month. About the time we were ten, we were allowed a movie every week. We would save the money we earned from our chores and from our job emptying garbage cans at an apartment house near us and spend it on Saturday afternoon movies.
We often spent much of the week speculating on the choices facing us Saturday afternoon, Would it be Tyrone Power and Maureen O’Hara in “The Black Swan” at the La Brea? “Now, Voyager” with Bette Davis at the Ritz? Or a rerun of Abbott and Costello’s “It Ain’t Hay” at the very cheap El Rey?
Only eleven cents at the El Rey until you were twelve. And what kid wouldn’t pay that to watch Gary Cooper hanging by his thumbs from the rigging of a vessel? But if the feature there was a weeper, we might go to the La Brea; it ran a serial with the cowboy hero tied to a bedstead in a burning building or lashed to railroad tracks or dangling over a precipice.
Tarzan was the greatest of them all. While characters in other movies writhed with torturous problems, Tarzan was simply himself. Maybe not too bright – his English was limited – but what a hunk of man! He had a cry we all sought to replicate. He could call elephants with it. He swam magnificently, palled around with chimps – getting kisses more often from them than from Jane – and he ran around in trees without holding on. 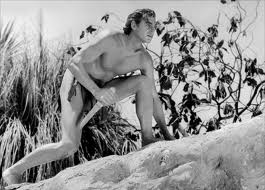 And ran through tress without holding on.

Tarzan had no romantic problems. Bob yelled, “Ick!” – quite loudly – when in “To Have and to Hold” Joseph Cotton kissed Deanna Durbin before they even met. Tootie told him to leave the theater.
Tarzan didn’t bore you with stuff like that. He lived in a neat tree house and dispatched villains without a lot of mooning over Jane. And he almost literally flew through the trees.
We had a big sycamore in the front yard of the house on Masselin. Bob and I filled it with ropes, rope ladders and several boards we called a tree house. I used to lounge on those boards, walk barefoot along one of the lower branches and swing down from the tree yelling, “Ahhhh-eee-ahhhh!”
As a journalist in Africa, I met and interviewed a lot of people. Never a noble savage. But whenever TCM plays “Tarzan and His Mate,” I’ll curl up on the couch and watch it.