Having pestered Travels in Africa readers for eight weeks with accounts of our son’s birth in Kenya on May 30, 1972, I thought it might be interesting to see how his parents occupied themselves immediately after The Great Event. Fortunately, I kept a daily log, a crucial tool for a working newspaper correspondent. Donanne writes in italics.

Donanne was confined to Nairobi Hospital for a week after the delivery. That may seem like forever to mothers accustomed to being back at work in two or three days, but that was the regimen in Nairobi. It suited us fine. Thanks to our National Hospital Insurance Fund card we calculated that the private room with pretty garden view cost $7.00 a day including housekeeping, baby nurses, flower arranging, three full meals and endless cups of cheerfully served tea.

I tried to visit twice a day. If the white expat/ex-colonial culture in which we lived had no tradition of baby showers, it had a well-developed custom of hospital visits. I would often find several friends with Donanne, generally trading baby stories.

Among those who came to call were friends from “the world press.” I wrote home: “Since we’ve been in Kenya, Newsweek, Time and Voice of America have all had babies. With the Monitor catching up, all of the major U.S. publications in East Africa have produced offspring. (Big deal.) Oh well, it is a big deal if you’re in on it too!”

According to the log, Joy Adamson telephoned me out of the blue the morning after the baby’s birth. Joy, quite a talented portraitist, had become a world personality following the publication and movie rendition of Born Free. It was about Joy and game warden husband George, raising Elsa, the orphaned lion cub, to maturity and setting her free to enjoy a wild lion’s life. She invited me to lunch at the Thorn Tree coffee shop of the New Stanley Hotel. While I had never thought of doing a story about her, I was delighted to meet her, even after the remarkable event that had occurred the day before.

Joy was reputed to be difficult, abrupt, demanding. I found none of this to be true in my relationship with her. She had come a-courting because she wanted something from me. She wanted publicity for Elsa Clubs, wildlife awareness societies for young people, being launched in the United States. She thought the Christian Science Monitor would be the appropriate place for an article about them.

For my part I thought it would be quite a coup for the Monitor to publish an article, carrying Joy’s byline on its zeepage. The zeepage, the cover page of the paper’s second section, was the Monitor’s foremost location for full page articles that could be run with ample illustrations and eye-pleasing layout. Since it was almost certain that Joy did not have the time or inclination to write a Monitor article, I would be happy to do that job for her. We could do an interview; I would write the piece and she could make whatever changes she wanted in order to give it her distinctive signature.

So Joy and I had designs on one another. 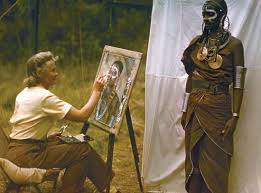 Then on June 14 I received a note from my twin brother Bob. He was Paul really, like my newborn son, but we called him Bob in the family. The note enclosed a letter from Arthur Ballet, head of the Office of Advanced Drama Research at the University of Minnesota. Ballet announced that he would be in Los Angeles on June 15 and would like to meet me at 10:00 am at a place he designated.

This announcement was a little like a royal summons. That was because, despite the OADR’s high-falutin’ academic name, Ballet was basically a one man shop, reading plays submitted to OADR and choosing those he felt worthy of the grant money he dispensed and/or his services in helping to place a play for production. He had read an unfinished draft of a drama of mine, called The Hemingway Play, sent to him by my brother – with my permission, I’m sure – after I joined the Monitor. Since Ballet wanted to discuss securing a production of the play, every playwright’s cherished dream, he was pretty sure I’d turn up at 10:00 am.

Except I was in Africa halfway around the world.

Subsequent posts will detail how these opportunities played out.