About the time I became a father on May 30, 1972, there also arrived the possibility of becoming a produced playwright. Arthur Ballet of the University of Minnesota’s Office of Advanced Drama Research, a dispenser of grants and a facilitator of production opportunities, had written that he’d be in Los Angeles. He set an appointment for June 15 to discuss The Hemingway Play. The letter had gone to my twin brother. He forwarded it to me. It arrived June 14. 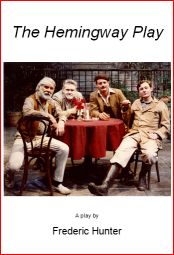 Papa, Ernest, Hem & Wemedge from the cover of the published play

Since, clearly, I would not make the meeting, I telephoned Bob – a very rare splurge in those days – and urged him to go in my stead. As he told the story, his first words after shaking Ballet’s hand were: “I’m not Fred Hunter, but I look like him.” Ballet, who was miffed, survived this unexpected development. He indicated his interest in attempting to place the play. I wrote Ballet, encouraging his interest, trying not to slaver over it since this kind of opportunity came rarely to a playwright, especially one working in East Africa as a newspaper correspondent.

My daily log notes that I undertook a series of revisions of the play. I typed them up (a laborious job), duplicated the script and sent it off to Ballet in Minnesota. In fact, the play was something I had worked on eighteen months or so earlier, before the Monitor opportunity presented itself, before leaving for Africa. It was a draft really, not yet finished work, and at the top each page bore the words The Hemingway Play, thus the title. If one read the play, he tended to recall it. That was because it divided Hemingway’s life into four characters with totally separate lives. It posited that they met and confronted one another in a “bullfighter’s hangout in Madrid” and did not spare criticizing each other.

(Curious about literary endeavor. Sparks of interest often stimulate a frenzy of creativity. I should have been busy enough providing the Monitor with three dispatches a week. According to the log, however, I was at this time reworking THP and also writing stories (“Lenoir,” “Madagascar”) that were eventually included in the collection Africa, Africa! Journalism did not allow me enough opportunity to play “artist” and occasionally I needed that. However, at this time I was not traveling. I remained in Kenya most of the rest of 1972.)

In due course, Ballet was able to place The Hemingway Play with the Eugene O’Neill Playwrights Conference in Waterford, Connecticut, close by New London for summer 1973, a year after I first learned of his interest. The month-long Conference assembled ten or a dozen playwrights. Their works were given staged readings by professional actors. The actors were not expected to be “off book;” they would carry scripts. There would be rudimentary blocking. Following several performances each play would be critiqued by fellow playwrights, actors, directors and dramaturgs. And the playwright would have a chance to undertake revisions. Well-known in the profession, the Conference was a feather in an aspirant playwright’s hat and might possibly lead to true performances.

In advance of the Conference itself which began in mid-July, the O’Neill invited the chosen playwrights to a pre-Conference weekend in May. At it each playwright would read his script aloud and get to know the other participants. The O’Neill was happy to pay airfare from the West Coast to Waterford for the Conference. But from Nairobi? It must have been an opportunity I wanted – just kinda! – because I paid the costs beyond what O’Neill would absorb. I flew from Nairobi to Los Angeles via London on May 12. A reunion with my family and playwright talk with my writer twin, then to Waterford on May 16. My fellow playwrights were surprised to have one among them who had travelled from Africa.

By the time I left for the Conference, we knew that we were being transferred back to the States. The Monitor office in Vietnam was being closed. That set in train a musical chairs game of Monitor correspondents. I was the guy left standing. We left Nairiobi July 9. Pauly was just able to walk confidently. I lay down on the floor of the plane (it was not crowded), hoping Pauly would join me and get some sleep. He preferred to watch the movie, then broadcast on large screens over the seats.

I enjoyed the Conference and the theater people there. We had a great time playing at putting on a show, just like Judy and Mickey in the movies we had grown up with. After the Conference I sent the play to George Hamlin with whom I had Old School ties. (Use those contacts!) He directed the Loeb Drama Center at Harvard University and did a quartet of plays every summer. He chose to do THP in the summer of 1975.

Alexander Scourby, the actor who portrayed the oldest Hemingway, called Papa, had been an apprentice actor in the Eva LeGallienne troupe with Norman Lloyd. Lloyd now ran the Hollywood Television Theater series at KCET, the then PBS station in Los Angeles. Scourby sent THP to Lloyd. Lloyd decided to do it. What a beautiful experience that production was, every participant enhancing the production values.

It almost made me forget Africa. But not quite. Nostalgia for Africa is very tough to shake. And since I’ve been writing there posts for several years, I guess one could contend that I’m still not over it.