Donanne offers an account of our first months adapting to new life-roles:

When Fred drove us home from the hospital in our Datsun (East African Safari Rally-tested) sedan, our dear “staff” was waiting to meet Pauly. Laban, who came with our coffee plantation house in 1969, had returned to us after our year of travel around the continent. Murugi, the washerwoman-ayah whom Laban had found for us, stepped forward with a sweet smile to shade the baby’s eyes as we emerged from the car into the bright equatorial sunlight. My diary notes, “We come home from Nairobi Hospital and are greeted warmly by Murugi and Laban. And we go right into Nurse Hendrick’s scheduling. Terrific!”

Here I’d like to take a moment to salute this amazing baby nurse who, from halfway ’round the world, smoothed our way into familyhood. Relying on the orderly schedule in Gladys Hendricks, My First 300 Babies, which had been sent to us by a friend in California, we employed a routine that suited us all. The detailed schedule in the book was our saving grace. I loved that it began, “In order that the advent of your baby and his peaceful integration into family life may bring to you and to him its full measure of happiness — instead of moments of indecision, disorderly days and sleepless nights — we will take step by step the hours of his first day at home: the exact routine that I have used as a baby nurse on all of my cases.” Nurse Hendricks’ words were a great comfort to us novices! “It is not what the baby does — for at times he would seem unpredictable — it is what you do about it.”

While I took care of Pauly and the food preparation (there were good and simple recipes in the back of the Hendricks book, Murugi dealt impressively with the laundry, plus washing and ironing dry the “nappies.” She spoke to Pauly in Kikuyu, and I continued my Swahili lessons so that she and I could communicate beyond smiles and hand gestures. Fred, in spite of his voluminous reporting schedule, often babysat when I went to town. Perching Pauly in his infant seat next to the typewriter on his capacious desk, he composed pieces to telex to Boston.

Supported by Nurse Hendricks we moved confidently into our new roles. I notice that my diary is mostly empty at this juncture! After a few comments the first week: “Took loads of photos (color) yesterday. Pauly is so tiny. Can hardly find him in his pram where he sleeps.” “He is always trying to hold his head up.” “He has a very strong grip.” there are no further entries until an eagerly anticipated date three months later. 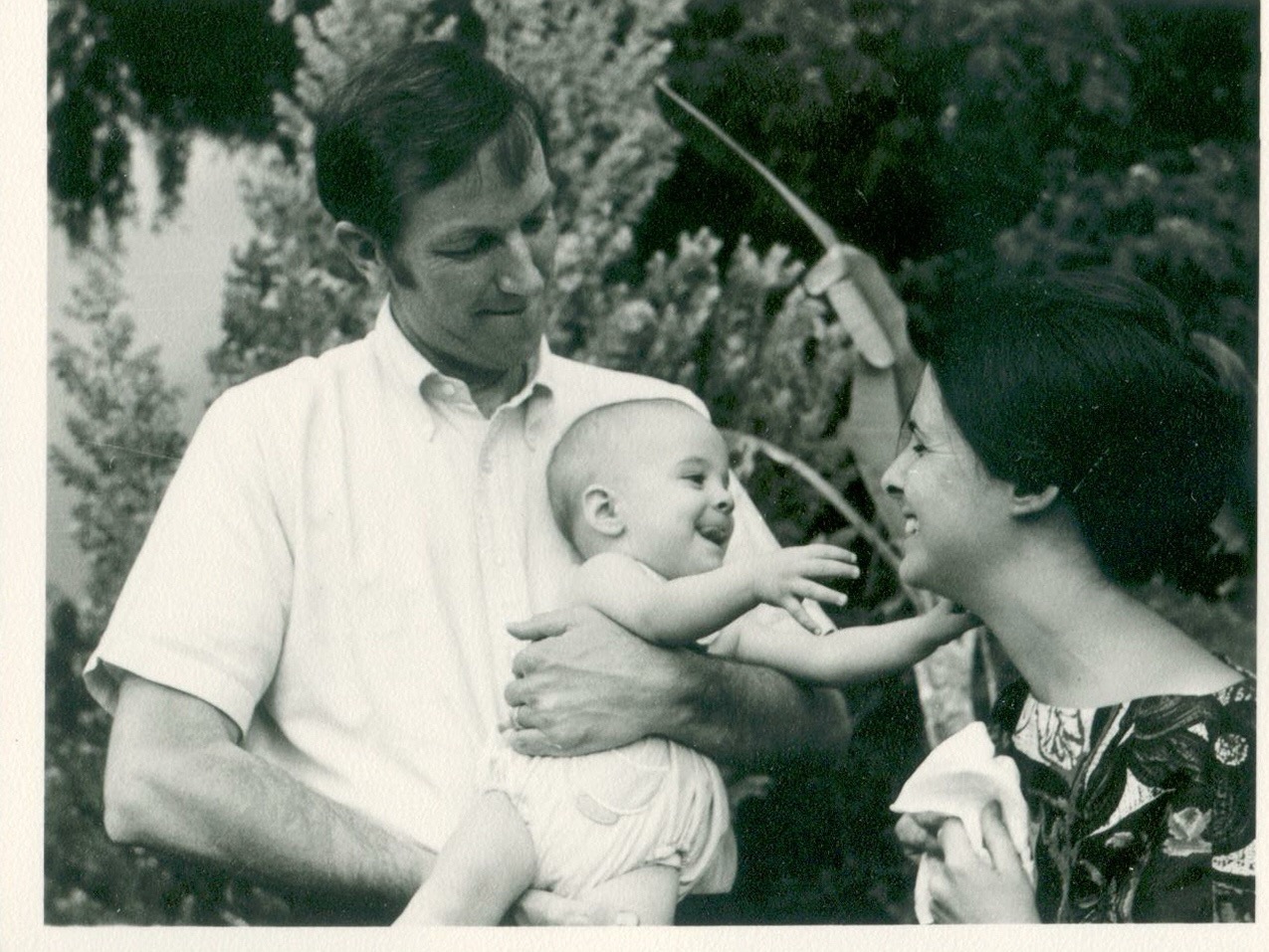 Becoming a family: in our backyard, Nairobi, 1972

On Monday, August 21, 1972, at 2:20 a.m. we three – now “settled into your own routine” (as my mom had so wisely written from Santa Barbara upon the baby’s arrival) – drove to Embakasi Airport to welcome my folks, Pauly asleep in the converted flower basket from the Central Market. The next evening we had a party to introduce the new grandparents to two dozen friends before we headed off on a short safari. Up to Samburu in the Northern Frontier District to view the intriguing long-necked gerenuks, grevy zebras and reticulated giraffes in the dry heat; an overnight at The Outspan in Nyeri, where my parents preferred Pauly-viewing to game-viewing. (Pauly turned out to be a great traveler.)

We introduced my folks to “the world press” at a dinner party on which my mom worked her Foreign Service hostess magic. Two dozen guests – including Reuters, Agence France Press, Voice of America, LATimes, Newsweek, German radio – enjoyed her exotic punch, relished beef stroganoff and chocolate-macadamia pie, and played “the game” – a precursor of “Pictionary” – that was as popular here as it had been in our home in South Africa.

A couple of days later we set off for beach walks and ancient ruins in tropical Malindi on the Indian Ocean. As we carefully loaded the car for Pauly’s second safari, my Dad cheerily remarked that we might as well put a trailer hook on the rear of the car and tow the baby’s room. 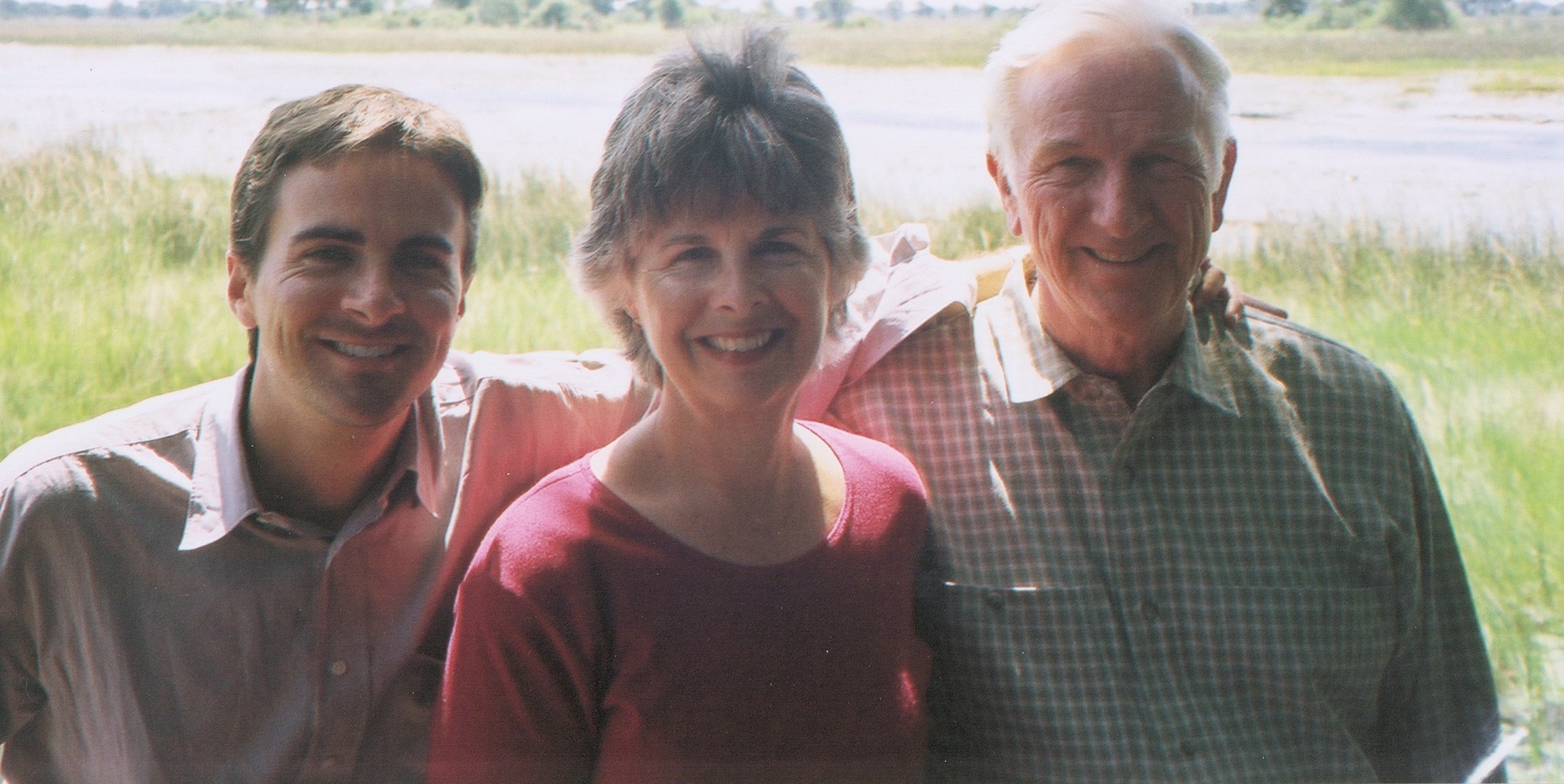 Still a family in Africa: on safari in Botswana, 2001

At Amboseli tented camp with great views of Kilimanjaro in the late afternoon and early morning, we had to defend our morning tea tray so that the monkeys did not abscond with the sugar – and, more importantly, with the baby. Mzima Springs’ underwater observation post provided tantalizing views of graceful hippos. Along the Tsavo River we marveled at the family life of elephants.

After three weeks of entertaining and being entertained, traveling and exploring, babysitting and bonding, my folks returned to California with new names: Babu (grandfather in Swahili) and Babu Tom and a tender appreciation of the wonders of family life in East Africa.