When Murugi babysat for us at night, I would take her to the unpaved alley beside the gas station. I would stop at the usual place where the alley tapered into a footpath. Leaving the car, she would move quickly, minding her own business if other Africans were about. That hurry always made me wonder if Murugi felt safe. Her figure grew smaller as she moved onto the downward slope of the path and raised her arms for balance. I wondered how steep the path was, how rocky or covered with vines, about where she lived and who her neighbors were. It never occurred to me that I would find out.

Late one rainy night I left Murugi where I always left her. She moved to the top of the steep pathway to wherever it was she lived. But she did not start down. I watched her through raindrops, trying to decide what to do. I left the car and went to her. She seemed both relieved and distressed that I meant to help her.

We started down the much-used path. It was muddy, steep and slippery. I took her elbow with one hand and grabbed at bushes and branches with the other. We made our way down without incident. I released her elbow and walked her to a pair of houses, originally built for Europeans. We said our “kwaheri’s” and I started back. I was able to climb up the path, making way for Africans who were surprised to see a European on it, and got back to the car. Within a few minutes I was home.

The next time Murugi was at the house, she told us, with Laban serving as translator, that she would prefer not to babysit for us at night. Or that, if she did, she would like Bwana to drive her all the way home, not merely to where the downward path began.

I was more than happy to drive her home, especially after escorting her down the path in the rain. I was sorry she had not asked earlier or that I had not thought to offer. So I now drove her home through the European area of Riverside Drive, then through the Asian quarter of Parklands and into an area I had not entered before – except in the rain on foot. Murugi directed me to a house I could see better now that it was not raining. Built long ago by Europeans, it was now very rundown and serving as a workers hostel.

One Sunday evening before sunset I got a better look at the place. A barber was at work in the last light of the day. An impromptu religious service was in progress nearby. Dogs hung about the two boarding houses, lean and inquisitive, sniffing around for food. Trash littered the yard. Children played among bits of metal, the once components of now-cannibalized appliances. A stump peeked through the tall grass. Cars that would never run again were pedestaled on wooden blocks. A faucet supplied water to the neighborhood. Nearby women washed both infants and laundry in buckets.

Murugi’s house seemed full of women. Another house, farther up the hill and more dilapidated, appeared occupied mainly by men. I wondered what the houses were like inside. But I knew that a European would enter one only in emergency circumstances.

The first time I left Murugi at the house, I was conscious that her neighbors watched me. This was Africa; most men taking women places in cars were assumed to enjoy access to their bodies. I wondered if such an assumption would give Murugi status – or cause her problems – if one of the men there considered himself to have a proprietary interest in her.

It occurred to me that some of the neighbors might ask Murugi, “Who is that white man? He must be rich. Is he giving you money? If he isn’t, you know, you can play him for some.”

When I returned from taking Murugi home, I would muse to Donanne, “I wonder what Africans think of us. Do they suppose we’re all rich? And we think we’re just getting by.”

OOOPS! On the previous post that mentioned the publication of my Congo memoir A YEAR AT THE EDGE OF THE JUNGLE, I neglected to note the the book can best be acquire directly from the publisher at www.cunepress.net. 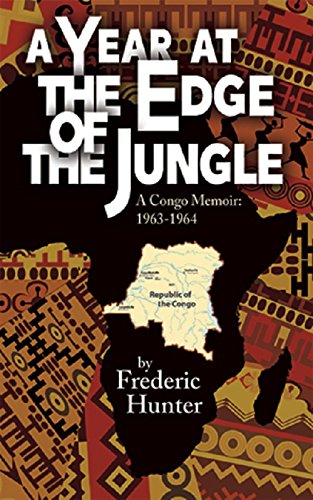 TRAVELS IN AFRICA: A Year at the Edge of the Jungle, 2015