Last week’s post mentioned that in mid-1972 rumors began to float around East Africa about bad things happening in Uganda. What exactly they were we Nairobi-based journalists did not really know, possibly violent tribal rivalries in the Uganda army.

Why didn’t we know? Wasn’t it our job, after all, to know – go and find out, if necessary – and report such things?

We did not know because one of our number had been assassinated there. He was Nick Stroh, a free-lancer for Detroit papers, who based himself in Kampala because so many other journalists worked out of Nairobi.

During Donanne’s and my home leave Stroh and a friend, Robert Siedle, a lecturer at Kampala’s Makerere University, drove out of the capital to an army barracks in the far reaches of the country. There they interviewed a Lieutenant Colonel Ali, the local army commander, about some matter they were investigating, possibly tribal tensions in the army. General Idi Amin’s tribal brothers were replacing those of Milton Obote, the Uganda president Amin had overthrown in a coup. Rumors whispered that those replacements had taken a violent form.

What Stroh learned – or perhaps what he ill-advisedly threatened – apparently alarmed Colonel Ali.. As Stroh and Siedle left the barracks, their car was attacked. They were killed. No inquest was made into the murders.

That incident alone did not deter us journalists from contemplating trips to Kampala. We decided that if we went there en masse, four or five of us at a time, it was unlikely that we’d encounter danger.

So a group of us decided to fly up to Kampala one Saturday. Andrew Torchia of the Associated Press arrived there earlier than the rest of us. His passport was immediately lifted and he was put under some form of house arrest. Hearing that news, Marian Torchia began working the phones, including to the White House, demanding that Idi Amin release her husband.

The news of Andy’s “house arrest’ circulated quickly through the World Press. Those of us who intended to go that day to Kampala quickly changed our minds. We cancelled – and, even though Torchia was soon released, we had no desire to venture into Uganda again any time soon.

So we journalists stayed in Nairobi. We knew bad things were happening. But we couldn’t confirm them, and we didn’t know exactly what they were. 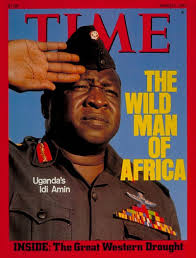 During this time a young man appeared at the office I had newly rented. He said that a journalist colleague had suggested that he call on me. The young man claimed to be the son of a Ugandan general; he had fled to Nairobi, he asserted, seeking safety. He offered to give me solid information about what was happening in Uganda. Since I found myself with virtually no contacts at all, solid information was exactly what I needed.

This situation was the dodgiest I encountered while reporting from Africa.

I was assailed by ethical questions. Could I trust this fellow? What did he want from me? Not money. Clearly it was unethical to pay an informant for news tips. He might be working for someone who wanted to twist my copy. He might start giving me tips in order to become so valuable that I would pay him. I knew my colleagues were using his tips and staying way out ahead of me on this story. What to do? I needed some place to start.

So I listened to what my informant had to say, all the time uncertain as to why he would give me news tips likely to jeopardize his father’s safety. Of course, I did what I could to check them out. Still, was I Dr. Faustus lending an ear to Mephisto?

I considered what he told me to be “background.” It enhanced my understanding of happenings in Uganda. If I used any of it, I did so sparingly; a correspondent learns to write around what he doesn’t know. Fortunately, I was never called upon to source my information. My reputation was not sullied. But I never stopped being nervous.